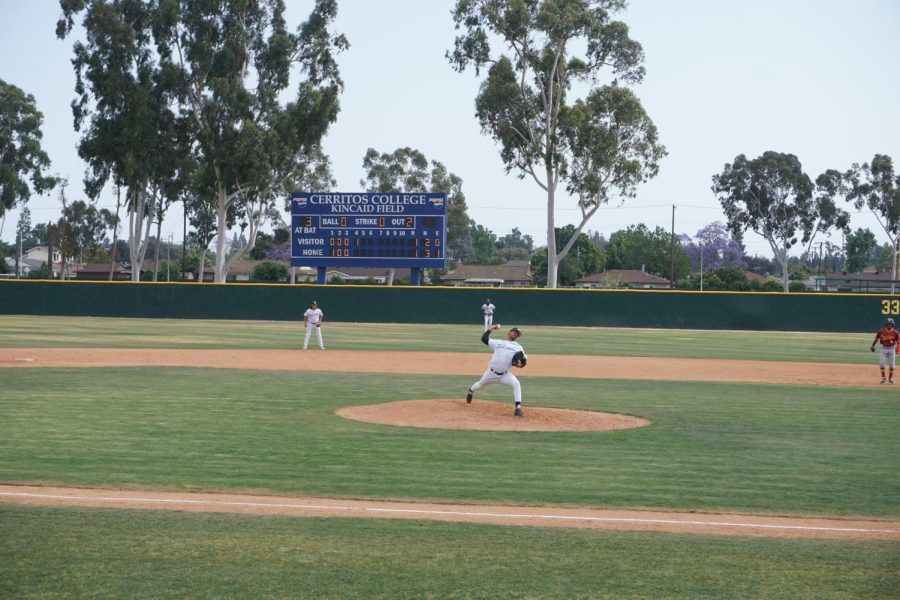 Moses Dokes and J'amore' Ward had a combination of nine K. The two pitchers were able to take care of the Lancers' offense. Photo credit: Alfredo Menjivar

The Cerritos Falcons go out with a bang with a walk-off RBI to win their final home game of the season. Alex Bueno opened the score in the bottom of the first with an RBI which led to Julian Francois scoring.

The Lancers came back to tie the game then took the lead at the top of the fourth to make it 3-1. Cerritos rallied back to tie it in the bottom of the fifth 3-3. Bueno had an RBI single to advance Francois to score for the go ahead run 4-3.

Cerritos continued to score two more runs to make it 6-4, then Pasadena came back again to tie the game at the top of the seventh. The suspense was increasing when the bottom of the ninth finally came.

Luis Chavarin, Jr. stepped up to the plate to bat. Chavarin, Jr. bunted the ball for an RBI single to advance Hasan Standifer for the game winning run.

“It was amazing, it was a great game today, close ball game.” We had some errors early on in the game but we stuck with it.” “Our guys, they never gave up, they stuk with each other, kept believing and we got it done,” said assistant coach Ron Perodin.

Cerritos picked up the pace a little bit and won four out of the last six games, including their final game of the season at Pasadena City with a 4-0 win. After a long suffering season, it finally concludes.

The Falcons missed the playoffs once again for the fourth time in seven years (excluding 2019-20).

Not only was it the end of the season, it was also the end for Alex Bueno, Danny Mariscal and Braydon Williams at Cerritos College.

“It was surreal being able to end my career at cerritos with a walk off. I’m very proud of all the guys fighting hard til the very end. being able to take the last two series after having a long season is what being a bird is all about. even when things don’t go our way we scrapped back and played hard,” Bueno said.

Bueno also mentioned that his favorite moment with Cerritos was his sophomore year when he played against San Jacinto and against Elco at their new field. It’s quite a shame for them to go but they’re moving on to pursue their careers.