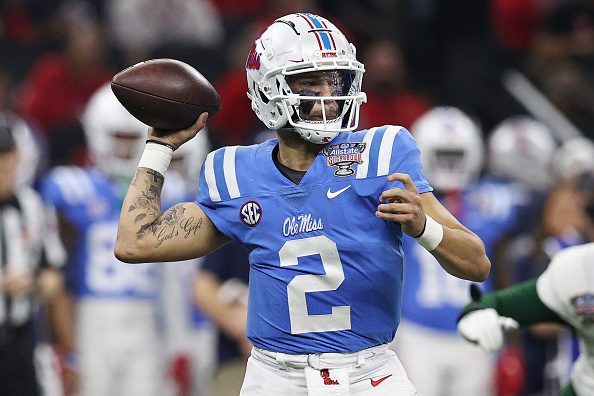 NEW ORLEANS, LOUISIANA - JANUARY 01: Matt Corral #2 of the Mississippi Rebels throws a pass against the Baylor Bears during the first quarter in the Allstate Sugar Bowl at Caesars Superdome on January 01, 2022 in New Orleans, Louisiana. (Photo by Sean Gardner/Getty Images)

Unlike past drafts, the 2022 NFL draft was not a big draft on quarterbacks. Only one quarterback, Kenny Pickett out of Pitt, was drafted in the first round.

Matt Corral, perhaps the most talented quarterback in the draft, fell to the third round at pick number 94.

Corral was once considered a first-round pick but fell due to an injury in the 2022 Sugar Bowl and off-field issues.

Corral entered 2021 as a heavy Heisman candidate after a fantastic sophomore season and started the season off hot. Production declined as the year went on for Corral, but the California native still put up solid numbers.

Corral finished his junior year throwing over 3,300 yards with a 68 completion percentage. He threw 20 touchdowns with only five interceptions.

Corral also rushed for 600 yards and 11 touchdowns. Corral’s running ability is one of his more underrated attributes. His mobility will help him well in the league.

Corral led the Ole Miss Rebels to a 10-2 record and a Sugar Bowl appearance. This was the Rebel’s first ten-win season in school history.

Unfortunately, Ole Miss fell to Baylor in the Sugar Bowl largely in part because Corral went down in the first half with an ankle injury and did not return.

The injury was luckily nothing too serious. With no breaks or tears, Corral only suffered a high ankle sprain.

Fully recovering from the injury was one of the reasons he did not participate in the NFL combine. Despite dealing with the setback Corral has repeatedly stated multiple times that he does not regret playing in the bowl game.

His consistent display of leadership on and off the field is the biggest reason he is such a steal. Unlike other top-notch draft picks, Corral decided not to opt-out of the bowl game.

He stated that he would not be where he was without his teammates and couldn’t leave them behind. Corral has repeatedly been described as a “locker room” guy that is great with his teammates.

This is the type of player fans would want to lead a team.

Regardless of his ankle, the other main reasons Corral fell so low were due to his battles with alcoholism and depression. Corral has been very open about his issues regarding his mental health.

It has also been stated that his behavior is unreliable which most likely stems from these issues. Corral also reportedly struggled a lot in meetings that he had with some NFL teams.

Corral has stated that these issues are behind him. It also shows a lot about his character that he opened up to the media about his battles.

A lot more athletes than people think deal with mental health issues and it is rare to see them open up about it.

Even though Corral has had some trials and tribulations, he is easily one of the most talented players in the draft. His 6-foot-2 frame and outstanding arm talent will be a problem for many teams in the future.