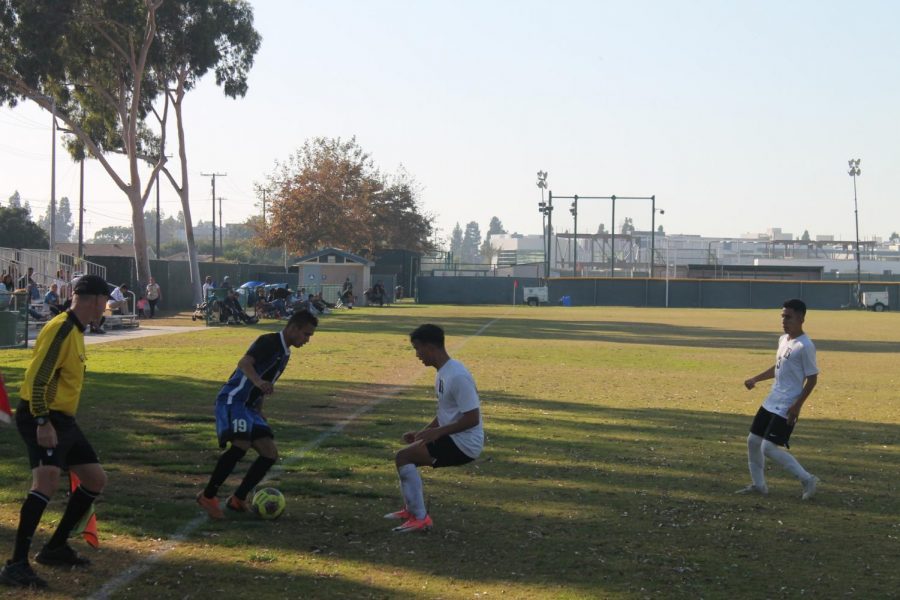 Freshman midfielder No. 19 Bryan Perez aiming for a shot-on-goal for Cerritos. The Falcons had 14 shots-on-goal however scored only two goals to beat Long Beach City College 2-0 on Tuesday, Nov. 5.

The Cerritos College men’s soccer team returned to winning games following a 2-0 win against Long Beach City College on Nov. 5. The Falcons are currently in second place in the South Coast Conference and played its final conference regular season match.

In the first half, Cerritos dominated the game from the beginning. The team had seven shots-on-goal, however, the Falcons couldn’t find the back of the net.

Vikings’ goalkeeper No. 13 Oliver Juarez made 12 saves in the match. Juarez turned away four golden opportunities for the Falcons, including twice before the end of the first half.

In stoppage time, freshman midfielder No. 7 Armando Ibarra took a clean shot from four feet out that was stopped by Juarez, while sophomore midfielder No. 13 Dominic Valdivia had his line drive tipped just over the crossbar less than a minute later.

In the second half, Long Beach would have its midfielder No. 28 Alexander Moreno cautioned by the referee three minutes before the hour mark.

Five minutes later sophomore midfielder No. 10 Bryan Ortega scored the opening goal and was assisted by sophomore forward No. 9 Kevin Diaz after a free-kick.

In the 68th minute, Vikings defender No. 4 Alberto Cruz was given a yellow card.

Forward Diaz picked up his 12th goal of the year six minutes later when he was able to chip a shot past goalkeeper Juarez after a beautiful pass along the goal line from sophomore defender No. 18 Jorge Cardona was right on the foot of Diaz.

When asked about the goal and assist forward Diaz said, “I feel pretty good. Although I think I could have finished a few more opportunities. But the important part is that we came out with a win.”

Sophomore defenders No. 5 Eugene Martinez and No. 3 Ernie Cueva were given a yellow card in the 86th and 87th minutes respectively. Martinez after a foul and Cueva for not giving the required distance for the free-kick that the Vikings were awarded.

The Falcons turned in a superb defensive effort and limited Long Beach City to just two shots-on-goal, with freshman goalkeeper No. 0 Luis Enciso earning the shutout win. Cerritos peppered the Viking defense and Juarez with 14 shots on goal.

When asked on the team’s performance Coach Artiaga stated, “It was a rough start we were unfocused, we seem to have trouble facing inferior teams. We woke up in the second half.”

Midfielder Valdivia mentioned after the game that he had three opportunities besides the first half shot-on-goal. Also freshman midfielder No. 19 Bryan Perez stated that the team could have won by more than two goals. “We had our chances but we have to keep working on finishing our shots-on-goal.”