Falcons fall 9-0 against the Roadrunners

The Cerritos College women’s tennis team lost against Rio Hondo College by a forfeit score of 9-0 due to the lack of players it had on Mar. 26. This is their eighth loss this season, and their fifth in conference play.

In the previous match on Mar. 14, both Cerritos and Rio Hondo split their games 3-3. However due to the lack of players that the Falcons had, the Roadrunners won 6-3.

Normally competing with five singles players, the Falcons were limited to just four, as freshman Palacios was unavailable.

On Feb. 28, both Cerritos and Rio Hondo played for the first time this season. The Falcons were without a win in their first four games. However, Cerritos obtained their first win of the season by beating the Roadrunners 5-4.

Of the six matches that were played, Cerritos, 1-4, 1-1, picked up wins in five of them. In singles, sophomore Lindstrom led the team with a 6-0, 6-0 win, as did freshman Palacios in the #3 match. Freshman Gonzalez dropped just one game in her 6-1, 6-0 victory.

After singles were completed, the Falcons knew they would have to forfeit one of the doubles matches, meaning they needed wins in both doubles matches.

Knowing they had to win both matches after forfeiting at the #3 spot, the Falcons saw Lindström and Gonzalez step up to record an 8-0 win in the #1 match, while Palacios and freshman Bayardo capped off the team win with their 8-2 victory.

Their final match before the post-season will be against Saddleback College on Mar. 28 at 2 p.m. 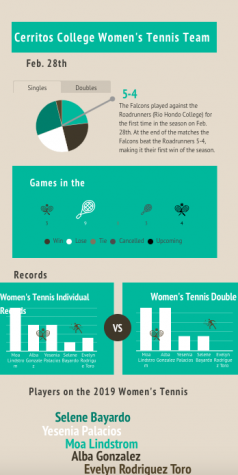