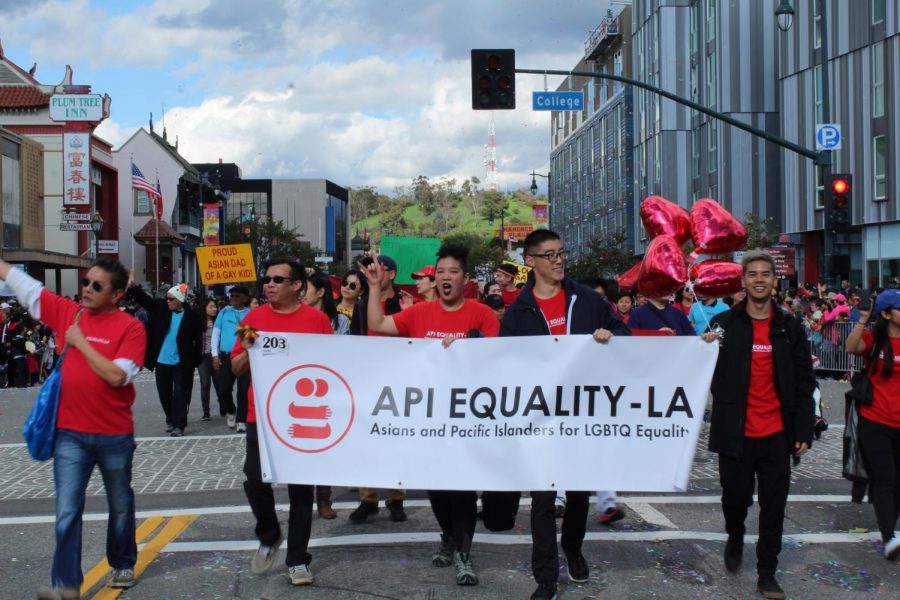 LGBTQ Asian and Pacific Islanders marched with allies at the annual Lunar New Year Parade in Chinatown to promote visibility and equality. The parade took place on Feb. 9.

At least 100 LGBTQ Asians, Pacific Islanders and allies marched with high energy and radiant smiles for the annual Lunar New Year Parade on Feb. 9 to further promote visibility and education within the API community.

Blasts of confetti and firecrackers littered the air and the streets of Chinatown as the boisterous crowd joined in on the celebration.

Peace signs were thrown in with exclamations of “queer the new year,” which the audience and allies alike responded to kindly.

Asian and Pacific Islanders for LGBTQ Equality LA, an organization meant to empower API communities to achieve LGBTQ, racial and social justice, were one of the largest contingents present.

Deoreena Wong, co-founder of API Equality LA, stressed that Asians exist within the LGBTQ community and wants others to understand that it is not “just a white, western movement.”

Grace Lee was a freshman “baby gay” in high school when she learned about API Equality LA and its participation in the parade.

It was the first time she saw openly proud and out, gay and queer Asian people.

“Being gay isn’t a white thing,” she emphasized, “Being Asian doesn’t mean that I’m not gay… intersectionality, we exist, we exist.”

She continued, “Whether they like it or not, we’re here.”

The organization was originally founded in 2005 in response to some of the protests in the Chinese community against marriage equality, Wong said.

Since then, conversations have expanded beyond that topic.

Wong said, “We’ve gone on beyond marriage equality because there’s so many issues that impact our community, so we’ve worked on a range of issues– immigration issues, education issues [and] health issues.”

The parade was Shirley Kawasuchi’s second with the organization and she feels blessed to have seen the contingent grow from last year.

Previously a volunteer and now on the fundraising committee, Kawasuchi said, “The parade is really special to me because last year it actually enabled me, or gave me the courage to come out to my family.”

Tanya Edmilao, former Cerritos College student and current community organizer, expressed excitement for other organizations and “people from all over” showing up to march in the parade.

Although a majority of the marchers were younger generations, older community members and parents came in support of their LGBTQ children and family.

PFLAG San Gabriel is the only API chapter within the United States and they marched proudly in support, waving their rainbow flags and signs.

Parents carried signs saying “proud Asian dad of a gay kid” and “I love my gay son” with big smiles.

Tristan Yi, who is also on the fundraising committee for API Equality LA, said, “It’s just like empowering and inspiring and it fills my heart with hope.”

Lee believes older generations go a long way in helping people move from tolerance to acceptance and that PFLAG is important in that regard.

Wong admits that when they first marched in the parade, they were met with curious stares.

“Now, as you can see, every year it gets more and more welcoming and we get claps and cheers and that’s encouraging,” she said, “I think we have seen a shift in the community around acceptance. Hopefully we’ve made a small difference.”