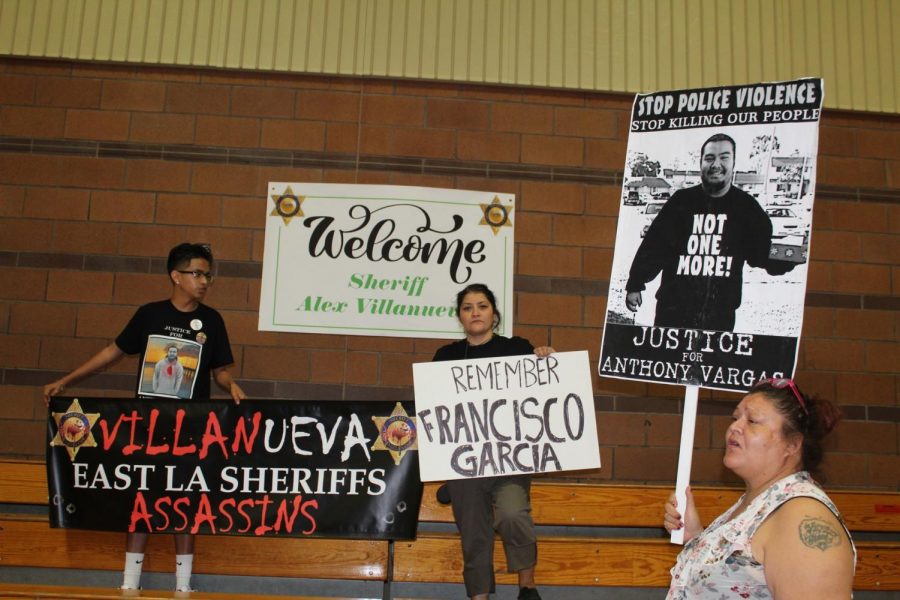 The Vargas Family continues to seek answers to their questions regarding alleged police brutality and their relative, Anthony Vargas, who was shot in the back 13 times last year by East LA sheriffs. The family stated that Sheriff Alex Villanueva did not answer any of their questions at the town hall meeting held in Norwalk on Sept. 5, 2019.

The Vargas Family of East LA continue to seek answers about their son, Anthony Vargas, who was said to have been shot in the back 13 times by East LA Sheriffs and died last year.

Since the passing of Vargas, the family stated they have been fighting for their justice and attending all meetings led by Sheriff Alex Villanueva, including the one held on Sept. 5 in Norwalk.

“We’re here to still let Villanueva know, let the sheriff’s department know, that we are going to continue to fight,” said Lisa Vargas, mother of Anthony Vargas, “They’re going to see us until we get that information.”

Lisa stated that she’s been told that information can’t be disclosed to her due to this being an ongoing investigation. The family said they have yet to receive an autopsy and official officer report.

Henry Vargas, the uncle, agreed and mentioned that the family’s questions submitted at the Norwalk town hall meeting went ignored by Villanueva.

“They’re using tactics to silence the families,” stated Henry, “This isn’t the first time that this has happened.”

The Vargas family said they have been in contact with 215 families that have lost a loved one to East LA Sheriffs as well.

“I love my nephew, but it’s no longer just about him. It’s about all of them,” stated Henry, explaining that these issues are taking place in the same area and same sheriff’s department, “Chances are [it’s] the same officers themselves.”

The Vargas family is partnered up with other organizations as well, such as LA Voice and Check the Sheriff.

“We’re trying to bring awareness to the community of what’s going on and we want to let Villanueva know that we’re not going to stop until he’s held accountable,” said Lisa.

Villanueva explained to the community at the Norwalk town hall meeting that the department is strict when it comes to who is allowed to get hired and stay on the sheriff’s force, and has upheld the same standards since 2006.

“Out of every 100 applicants, 3 get hired,” stated Villanueva, “Half of those don’t make it through.”

According to the standard, criminal activity automatically disqualifies a sheriff.

The family’s Facebook page “Justice for Anthony Vargas” has about 273 followers and updates events and meetings led by Villanueva.

The next one will be held in Palmdale on Sept. 12.

“If the LASD has murdered someone from your family, I can not express how important it is to show up at these town hall meetings,” the family posted, “He absolutely hates seeing families like us and hates seeing the names of the people we are fighting for.”

“My son is no longer here to share his voice, so we’re the voice that is going to stand in for him.,” stated Lisa.