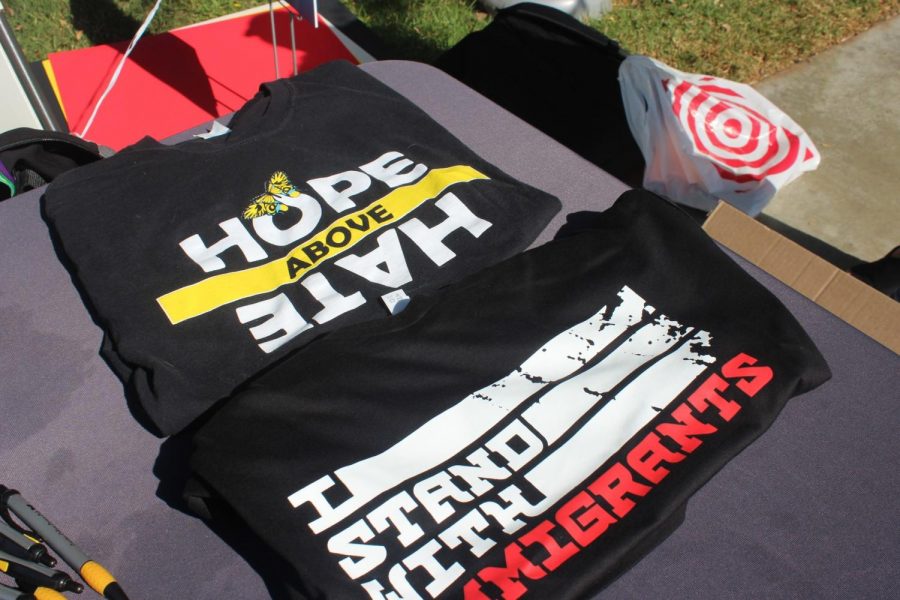 "Hope above Hate" and "I stand with immigrants" t-shirts were given out to people who wrote inspirational messages for undocumented students on campus. Maria Quinonez, president of the DREAM club, was in attendance and handing out the t-shirts.

As Hispanic Heritage Month comes to an end, the DREAM club held an open mic and recited a series of poems in solidarity with undocumented students on campus at the Student Center stage on Oct. 29, 2019.

The purpose of the open mic and poem recital was in support for undocumented students on the campus.

Kicking off the open mic session, Rosa Carrillo, a counselor for undocumented students and advisor for the DREAM club, recited a poem that moved the audience, “Why am I so brown,” by Trinidad Sanchez, Jr.

“I will continue to support with wellness and guidance for all undocumented students,” Carrillo proudly announced before her poetry read.

The sensitive poem where a parent explains to their child the color of their skin was well-received by the audience.

Carrillo reads, “God made you brown, mi’ja, to wear as a crown for you are royalty – a princess, la raza nueva, the people of the sun.”

Carrillo explains the Dream Club’s goal for the open mic was to let students know “they do have support, they’re not alone, they are reaching their goals and that they’re furthering no matter what, whatever their status.”

President of the DREAM club, Maria Quinonez, 26, was present along with other DREAM club members like Jesus Meillon, computer science major, who also recited a poem.

Quinonez is currently majoring in Spanish and hopes that this event will allow some students to express themselves through poetry.

Meillon read “Undocumented” by Mariana D. Zamboni, of which the poet said they can relate to being an undocumented student.

While there was a lack of crowd and not many people participated in the open mic, Carrillo, Meillon and Quinonez, had notecards for onlookers to write a motivational message for undocumented students.

The messages written on the cards, “[Quinonez is] actually planning on putting them up for students to see that there are undocu students and they’re not afraid, they do have support,” says Carrillo.

For each person that wrote an inspirational or supportive message, they were given a T-shirt that read “hope above hate” or “I stand with immigrants.”

“I have family that are immigrants, so it’s something that I take personal and it’s important to me,” Kevin Campos, business major, said.

This is actually a worldwide event, which took place on Oct. 22, but the DREAM club members were not able to meet up that day for the open mic.

“This event is for the students who are afraid of what’s going to happen to their education. This open mic is a chance to find support with other dreamers as well,” Quinonez states.

Quinonez adds that this will eventually let students on professors a chance to let feelings of relief during this open mic.

While the open mic was a last-minute event according to Carrillo, the LGBTQ history month event entitled “Vogue the House Down” was set for the same time slot, but failed to announce it was canceled.