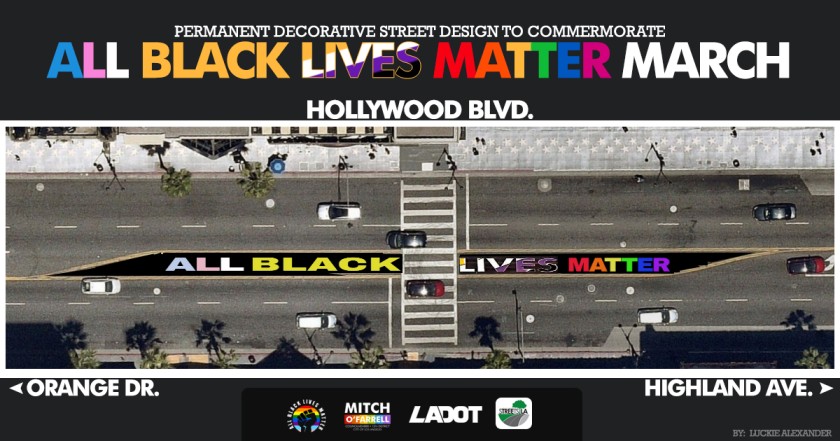 The "All Black Lives Matter Mural" will be permanent on Hollywood Blvd, between Orange Dr. and Highland Ave. The mural will be completed by August 29. Photo credit: Los Angeles Bureau of Street Services

The City of Los Angeles will make the “All Black Lives Matter” mural on Hollywood Boulevard permanent. ABC 7 reports that Councilman Mitch O’Farrell, StreetsLA, the Los Angeles Department of Transportation and Black LGTBQ+ Activists for Change have partnered for LA’s newest attraction, which is scheduled to be completed by Aug. 29.

The original “All Black Lives Matter” mural, dedicated to LGBTQ+ people of color, was painted in Hollywood before the protests in the wake of the murder of George Floyd by Minneapolis police.

After the protest in Hollywood on June 13, Councilman Mitch O’Farrell, who is openly gay, made a motion to make the mural permanent in order to commemorate the movement.

“We had a once-in-a-generation moment this weekend in Hollywood as tens of thousands gathered for a peaceful demonstration on one of the most recognizable boulevards in America,” O’Farrell said in a statement to CBS LA.

“This is the very first public space installation devoted to the Black queer community and transgender people of color. It’s the right time, it’s about time, and when Hollywood speaks, the audience notices,” O’Farrell told LA Times.

People who work on Hollywood Boulevard shared their opinions on the mural.

Tomas Alverez, manger of the Baja Fresh Mexican Grill on Hollywood Boulevard feels the mural will be great for the community and business.

“We depend on tourists for business, especially people in the black community,” Alverez said. “The mural is another reason for tourists to come to Hollywood Blvd.”

When asked about how the road closure affected his business, Alverez stated he had not seen much difference. Due to COVID-19, the streets are not as busy.

John William, a security guard for Coffee Bean, feels that the mural will not change anything.

“Murals and statues call attention to the issue, but nothing will change,” William said. “I have a brother and sister in the LGBTQ community, but the mural won’t do anything.”

Patrisse Cullors, a co-founder of Black Lives Matter, told ABC News that protesters are demanding accountability above all else.

This proposal will “dial back the LAPD raises padded into the three billion dollars (LAPD Chief Micheal Moore) while vital services and programs see employees furloughed and lose funding,” according to the Black Lives Matter Los Angeles website.

The “People’s Budget” also calls for the defunding of police. Instead of 54% of general funds given to LAPD, the budget would see that only 1.64% of public funds go to LAPD, less than one-tenth of the proposed budget.

The “People’s Budget” proposal would see that Universal Aid and Crisis Management gets 45.61% of general funds.

The mural on Hollywood Boulevard seeks to commemorate the hard work and sacrifice of the Black Lives Matter movement and as a reminder that the United States still has a long way to go to reach true equality for people of all races and sexual orientations.