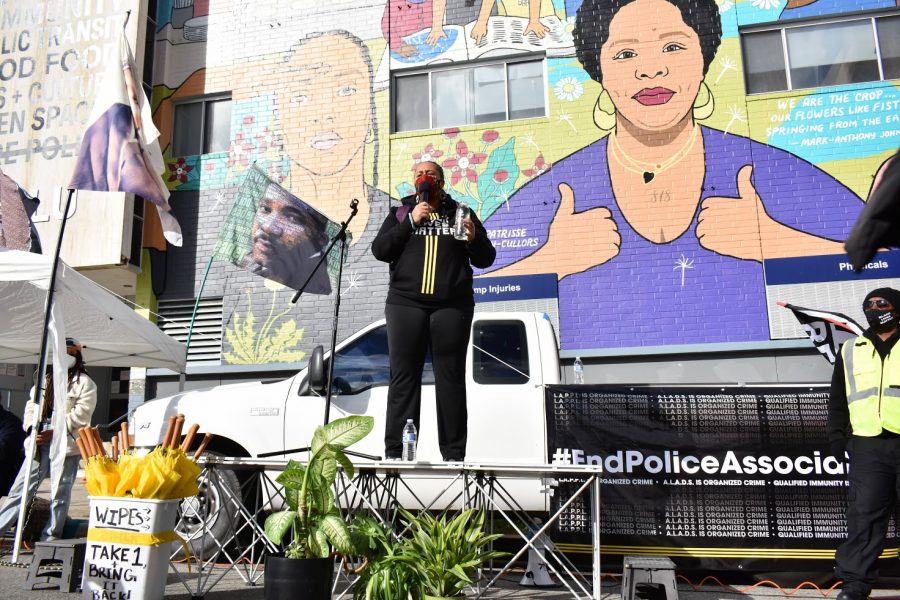 BLM organizer Tabatha Jones Jolivet speaks during a protest on March 8, 2021. She said BLM does not negotiate with any organization that represents "police power."

The Los Angeles Police Protective League responded to Black Lives Matter’s demands on March 10. The movement held its third weekly protest outside the league’s headquarters in Downtown Los Angeles where they called for abolishing the LAPD and removing the PPL from the House of Labor.

The PPL represents close to 10,000 LAPD officers and provides them with benefits such as administrative aid and legal defense.

“Their proposal is incredibly reckless,” said Dustin DeRollo, the league’s public relations representative. “That would be literally catastrophic for the people of Los Angeles and for the safety of LA residents. You’d be talking about no ability to protect folks from sexual assault, from the incredible increase in killings and shooting we’ve seen over the last year here in Los Angeles.”

“You would literally have a city of chaos,” he said.

Some members of BLM have instead called for the defunding of the police. Supporters say that the 54% of the LA city budget they receive is too much, and their funding should be a fraction of what it is now.

“It’s actually not 54%, that’s a budget in terms of art that they are using. The current funding for the LAPD keeps us at bare-bones staffing,” said the PR representative. “We’ve had to close specialized units such as detectives, gang-enforcement details, detectives working on robbery-homicide. Further cuts to the budget only do things like make it necessary to cut back further on those types of actions and investigations.”

DeRollo estimates that LAPD actually receives about 40% of the city budget.

Despite BLM’s growing number of supporters, the LAPD and the PPL have not reached out to them to negotiate on their demands.

“They’re not an organization we would negotiate with,” DeRollo stated. “There is not a request to talk with us. There has never been a solution provided at all. That’s a fact.”

“We want to create solutions. To the extent that any group continues to focus on divisiveness, promoting un-workable ideas, is not going to do anything to improve police and community relationships,” he concluded.

The representative also refused to provide contact information for other league organizers and directors for further questions.

DeRollo stated that BLM has every right to protest in front of the league and is exercising the First Amendment.

Dr. Melina Abdullah, the co-founder of the Los Angeles chapter of Black Lives Matter, responded directly to DeRollo’s statement that the league would not negotiate with the movement.

The co-founder also said only a police apologist or policing member would agree with the PPL describing BLM’s demands as reckless and chaotic.

“The police associations only advocate for their own very narrow self-interest, and that has brought on the murders of our people,” she said.

“They have extorted. They have bullied people. And every year the budget has gone up because of that. We don’t have anything to say to them,” Akili continued, “and I suspect they don’t have very much to say to us.”

Akili’s response to the PPL’s claims the police budget is closer to 40% rather than 54% was that they are lying and hiding where the money is spent.

“They are one of the few departments that don’t submit a binder for their budget,” Akili claimed.

BLM supporter Faith Northern said it’s “heartbreaking” that the PPL has no plans to negotiate with the movement.

“People are working hard to make their voices heard, and it’s sad the police won’t hear out the people they swore to protect,” Northern said.

“I don’t understand how police prevent crime. I feel that they punish crime more than they prevent it,” said supporter Molly McLean. “They’re doing stuff that’s intimidating, and I don’t see how that’s making us safe.”

Some supporters like Gustavo Crespo feel that the police should be defunded, not completely abolished.

“I feel it’s a bit radical for this country,” Crespo said as he banged a bass drum in support of the protest. He also participated in the rally to remove former District Attorney Jackie Lacey.

Actor Brandon Flynn, who played Justin Foley in the popular Netflix series “13 Reasons Why,” attended the protest. While he declined to comment, he has been a vocal supporter of the movement.

According to Abdullah, Black Lives Matter plans to continue organizing outside the Police Protective League building every Wednesday “until [they] win.”

“We are relentless”, she said.

The Police Protective is located at 1308 W 8th St UNIT 400 in DTLA, directly in front of the American Civil Liberties Union of Southern California.

The ACLU building depicts a massive, colorful mural displaying significant figures in the fight for civil liberties and civil rights in Southern California.

“Every day when they look out the window, they have to see my face. They have to see Baba Akili’s face,” Abdullah said, “I think it’s very powerful and telling.”

“We are constantly here even when we’re not.”