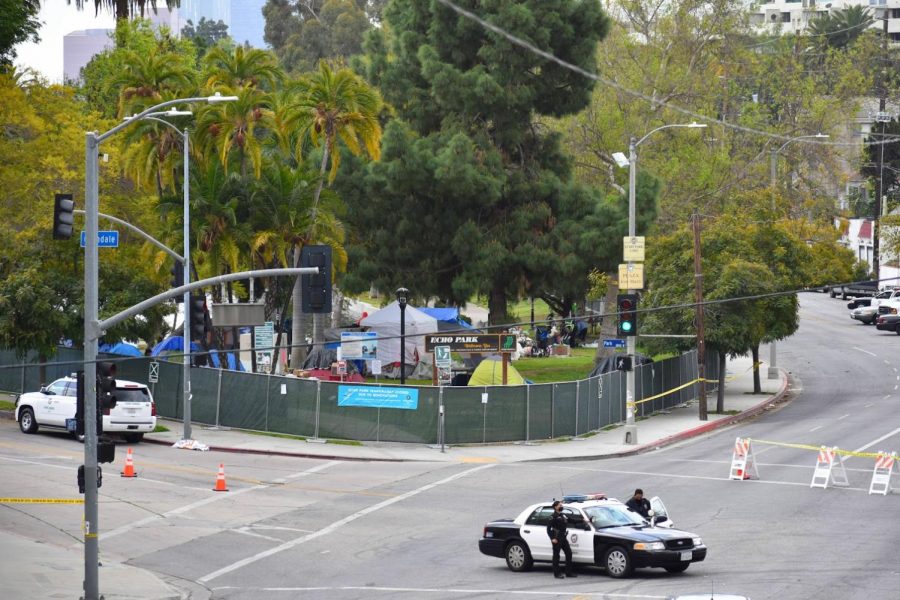 LAPD officers block each intersection of Echo Park Lake on March 25, 2021. They prevented any civilians from entering the park and blocked the unhoused from their belongings.

LAPD erected a fence around Echo Park Lake’s perimeter after an evening of confrontations between police and protestors resisting the city’s attempt to evict unhoused people from the park on March 24.

According to the Twitter account Recon Source LA, hundreds of supporters attempted to block the police from the park by joining hands and blocking the street. Law enforcement in riot gear responded by blocking exit routes and forming a scrimmage line.

At 11 p.m., LAPD tear-gassed peaceful protesters and broke a protester’s arm during the encounter. Law enforcement also placed a chain-link fence around the park to keep people out, but the fence was also trapping the unhoused persons inside.

By the morning of March 25, the LAPD blocked every intersection leading to the park, barring advocates and press from entering Echo Park Lake or surrounding streets. Police only allowed the unhoused to exit through one opening to be boarded on busses and taken to a hotel for temporary housing.

It is unclear how the LAPD planned to prevent the potential spread of COVID-19 while relocating and removing people experiencing homelessness.

LAPD Officer Valasquez stated the unhoused were being moved for renovations to the park.

“It’s dangerous having them around the machinery. It’s a safety hazard,” the officer stated. “I know they are moving them to hotel rooms in the meantime. I know they have resources like rehab centers and job resources. It’s pretty cool the stuff they have, and it’s easily accessible.”

Two men sitting on the curb of Park Avenue and Glendale Boulevard expressed concerns about their shelters and the property within them, which they had to leave behind while exiting the park. They said that they opted out of the temporary housing.

Albert Logan once lived in Echo Park but was relocated to the Grand Hotel. He assisted a friend to a bus, so he could receive housing at a hotel.

“They should comply, but not everyone wants housing. They do drugs and have had bad experiences,” said Logan.

As night fell, protestors returned to the park but were met with heavy law enforcement resistance. Police formed scrimmage lines, trapping the peaceful protesters from leaving.

At 8:11 p.m. Thursday night, the LAPD HQ Twitter account announced that the gathering on Park avenue is an unlawful assembly, claiming that people in the crowds were using “high-intensity lights” against officers to obstruct their vision and “prevent them from performing their duties and/or defend themselves if needed.”

Arrests began and dozens were detained and handcuffed by LAPD, including a Los Angeles Times reporter James Queally. Another LA Times reporter tagged the LAPD’s Twitter account, alerting them that they have arrested a member of the press.

At 9:41 p.m. news footage showed that protesters were loaded onto LAPD police vans after being arrested. Dozens of tweets tagged #EchoParkRiseUp show videos and photos of police lines collapsing on groups of protestors.

This is a developing story.