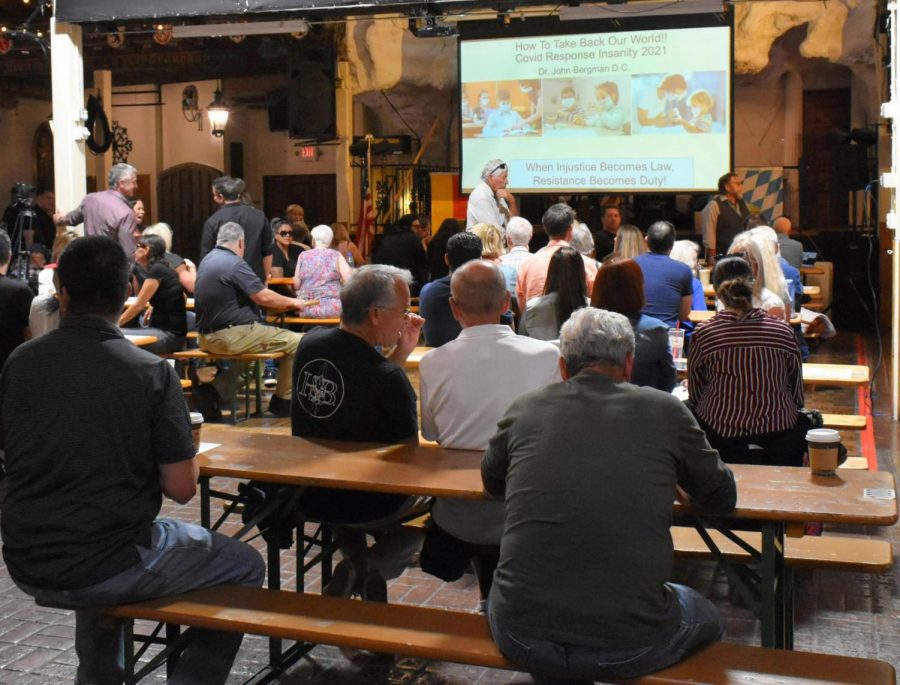 Dozens of maskless attendees attended the indoor seminar at the Old World Bar and Restaurant on March 31, 2021. Dr. Billy Demoss and Dr. John Bergman argued against widely held beliefs about the virus and the vaccine.

Dozens of anti-maskers and anti-vaxers gathered for an indoor seminar at the Old World German restaurant in Huntington Beach on March 31. Two chiropractors argued against the general consensus about COVID-19 by claiming the vaccine is harmful and masks are dangerous.

During the seminar, Dr. John Bergman and Dr. Billy Demoss told the maskless crowd disputed statistics about COVID-19 and made dubious claims about basic medicine and science.

“COVID is no worse than the flu,” said Dr. Bergman, as he showed his audience apparent statistics about death rates.

The CDC has explained that the COVID-19 is highly infectious and deadlier than the common flu.

“330 million people are living in America. On average, 7,700 people die every day – that’s normal,” Bergman exclaimed. “The CDC [Center for Disease Control]. came out and said their numbers were 94% off.”

A fact-check conducted by USA Today found that the CDC made no statement that their COVID-19 death count was inaccurate.

“The vaccine doesn’t prevent infectivity or transmission, but it alters your DNA expression,” Bergman claimed.

Almost everyone in the audience believed the COVID-19 vaccine is ineffective or bad for their health, despite broad consensus amongst scientists, who confirmed that it is effective against the virus.

The event is a part of a larger trend of anti-vaxxers who not only refuse to take the vaccine, but also seek to convince others not to as well.

“Limiting oxygen to your cells will not strengthen your immune system,” Bergman said about masks. “Try putting a mask on a 14-year old autistic kid. It doesn’t work.”

Bergan also encourages his patients to not wear masks when they come in for a visit. He also mocked a man wearing two masks, saying, “He must’ve been ugly as hell.”

Bergman made other claims, such as that ventilators overinflate and blow up a person’s lungs, COVID-19 cures the flu, COVID tests are fake, flu shots do not work and germs do not cause disease.

They passed around a book titled “The Case Against Masks: 10 reasons masks should be limited,” by Dr. Judy A. Mikovits and Kent Heckenlively, J.D.

Mikovits is a controversial and divisive virologist whose claims about COVID-19 have been disputed by the majority of the scientific community.

Demoss discussed one instance where he took a mask out of the trash and licked it to prove that the virus is a scam.

Demoss also touted a debunked article from a WordPress blog.

“Jan. 25, 2021, the World Health Organization now says there is no scientific or medical reason for wearing a mask. Sadly our corrupt politicians, all the brainwashed people who still believe those things, still want us to wear those things on our face,” the chiropractor said.

The WHO made no such comment saying that masks do not work. In fact a doctor from the WHO, Dr. Maria Van Kerkhove, stated “They can’t be used alone, so we need to emphasise that because not one solution is enough. Not masks alone, not physical distancing, not hand hygiene – you’ve heard us say that quite a lot.”

“People don’t come to me that don’t get me. I don’t attract people with gloves and face-shields and all that crap,” Demoss said about his patients.

Studies from the CDC have proven that masks prevent the spread of COVID-19.

Demoss also believes that the vaccine would cause infertility and stated that chemotherapy is like mustard gas.

Many of the claims made by these doctors have been widely denounced by other doctors as conspiracy theories.

The event was advertised by Sarah Stephens, a Republican candidate for California governor against Gavin Newsom.