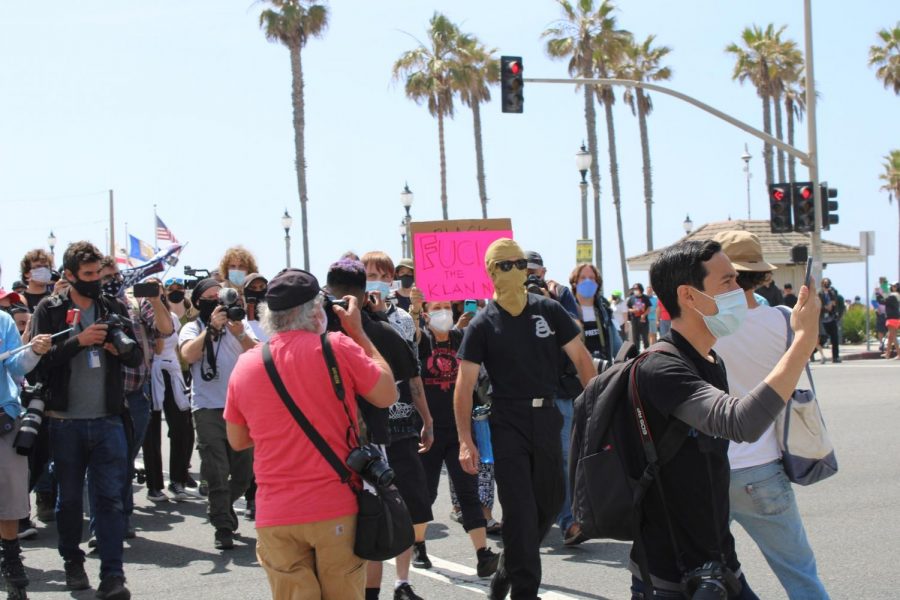 A right-wing agitator is pursued by a crowd at the Huntington Beach Pier. The man was chased until he was escorted by police into a substation on April 11, 2021. Photo credit: Lola Ajetunmobi

“The counterprotest today is dangerous, and endorsing this would be dangerous to them as an organization,” said Johnson. “My NAACP president encouraged me to call this off, but look at how important this is to people.”

Hundreds of counter-protesters lined Pacific Coast Highway and blocked the entrance to the pier, protesting against the extremist groups.

Huntington Beach resident, Tom McNamara, held up a sign that said “Start a conversation by acknowledging white advantages in America.”

McNamara said, “My whole point is that if you can admit that one group is at an advantage over another group that is at a disadvantage, then we can move on to how to fix it.”

Many held signs condemning the KKK and in solidarity with Black Lives Matter. One counter-protestor, psychologist Ann Tran, who now lives in San Francisco, said she remembers the countless incidents of racism she experienced growing up in Huntington Beach.

“I was in student government in high school and I had to do a dance dressed up as a ninja. I mean, countless microaggressions, countless racist things and there’s a reason why I don’t live here anymore,” said Tran.

Two arrests were made around 11:30 a.m. on the counter protest side. One counter-protester was arrested for violating “noise ordinance” and another for carrying a small knife and pepper spray. Police arrested 12 people total throughout the day.

While the scheduled Klan rally did not appear to take place, a scattering of white supremacists did make appearances in the crowds around the pier, agitating and confronting protesters.

Trump supporter Kelly Johnson, who also attended the January 6 rally-turned-insurrection in Washington D.C., carried a Trump 2020 flag into the counterprotest.

“I didn’t know about the White Lives Matter protest,” the Trump supporter claimed. “I heard about the BLM, and I wanted to come and the support the babies that they’re killing each day.”

“We are all God’s children. We’re not here to be divisive and I just don’t believe in Black Lives Matter just like I don’t believe in the virus,” Johnson said, as he displayed pictures of himself at the US capitol on January 6.

He later carried his Trump flag down Main Street, where he was surrounded by protesters and his flag was torn down. A scuffle ensued that was broken up by police at the scene.

Several heated disagreements between counter-protesters and bystanders sparked tense confrontations. Some led to violence, leading to police officers stepping in to separate crowds.

Two men who appeared to be right wing extremists, one wearing a Proud Boy t-shirt, came to argue with the crowd and were met with hostility by counter protestors who chanted “Go home Nazi” and “F*ck you Nazi” while chasing them away.

One of the men was cornered by the crowd before being escorted by officers to the HBPD substation at Walnut Avenue and 5th Street.

The building was then guarded by the Huntington Beach Police and SWAT team.

“They are arresting people of color for things that white people would get away with,” said Shalisa Williams, a counter-protester who says she is active in the Democratic Party.

“They escorted that man to safety, but when have they ever done that for a person of color who has been in danger? That’s why we are here, to speak out against the privilege and the hate.”

The crowd eventually moved down Walnut towards Main Street before being stopped by a police line that blocked pedestrians.

After a brief standoff, the police helicopter that was shadowing the crowd announced that the HBPD had declared the event an “unlawful assembly” and ordered people to disperse, threatening to use crowd control munitions to clear the streets.

An emergency alert was sent to phones in the area saying “An unlawful assembly has been declared, disperse or be arrested.”

Despite the threat of force, the crowd continued to stand around just off Main Street.

Only minutes after threatening dispersal or arrest, the HBPD units blocking the street got into vehicles and drove away, essentially defusing the situation.

The crowd of counter-protesters, press and locals appeared to part ways in all directions, ending a day of confrontation and anti-racist opposition to the Klan organized event.