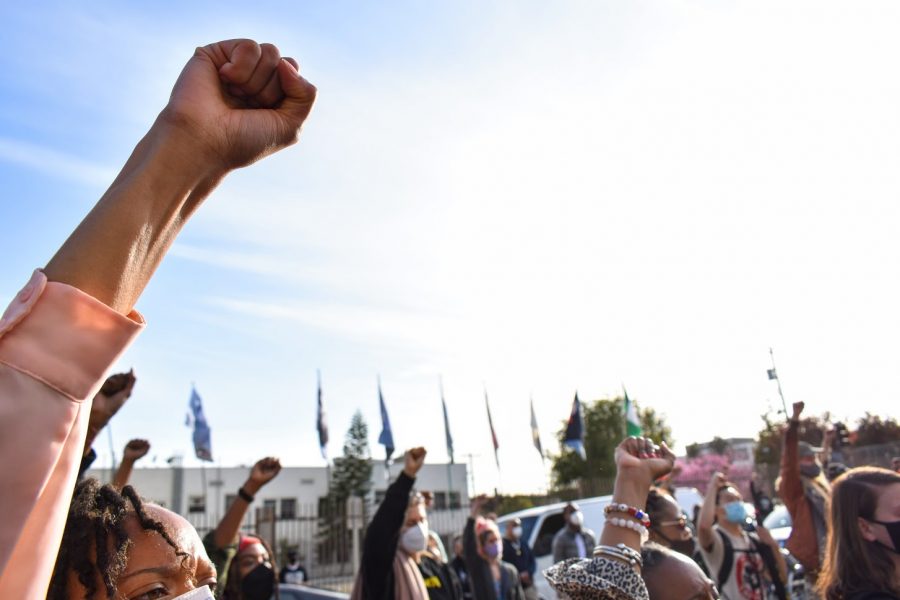 BLM supporters raise their fists in solidarity as the Wednesday-annual protest comes to an end. They held the demonstration in front of the LA PPL on April 14, 2021.

Daunte Wright was killed by Minneapolis police officer Kim Porter on April 11 after she pulled Wright over for expired license plate tags. After learning Wright had an arrest warrant, she tried to take him into custody, but he resisted arrest and tried to get back in his car.

Porter warned the 20-year old man that she would tase him but instead shot him in the chest. He drove away but later died of his wounds.

The 26-year police veteran claimed she mistook her gun for her taser. Porter and Brooklyn Center Police Chief Tim Gannon resigned on April 13.

Many BLM-LA supporters were skeptical that Porter mistook her sidearm for her taser.

“A system that is designed to punish and steal life can make no mistakes,” said BLM-LA organizer Tabitha Jones Jolivet. “The officer absolutely murdered Daunte Wright. We join the community in solidarity to demand accountability.”

BLM-LA has advocated for the abolition of police associations. They argue the killing of Wright only bolstered their argument.

If Porter is convicted of her second-degree manslaughter charge, she will serve up to 10 years in prison.

“We are a system that believes in the abolishment of caging and policing, but under the conditions where we have sentencing, the police should be the first to go,” said Jolivet.

The trial of former Minneapolis police officer Derek Chauvin continued several miles away from where Wright was shot. Chauvin is standing trial for allegedly murdering George Floyd on May 25, 2020.

After receiving a report that Floyd used a counterfeit $20 bill, Chauvin and three other officers attempted to take Floyd into custody. The bill in question was later found to be legitimate.

After resisting arrest, Chauvin pushed Floyd to the ground and kneeled on his neck for nine minutes, while Floyd begged for help and yelled that he could not breathe.

Floyd’s death prompted protests and riots in Minneapolis, Los Angeles and across the country.

“Many of the witness’ testimonies are compelling,” said BLM-LA chapter founder Dr. Melina Abdula. “We are all skeptical of getting any resemblance of justice [from] this process.”

Abdula refers to the history of police officers receiving little to no punishment for the murder of unarmed or innocent Black men and women.

“This is bigger than Chauvin. We have to topple policing as we know it,” Abdula said. “Chauvin is not a bad apple. He is part of a rotten system.”

Cardiologist Dr. Jonathan Rich gave expert testimony during the trial, stating that Floyd died from a cardiopulmonary arrest caused by a lack of oxygen.

Hundreds of anti-racism demonstrators arrived at the Huntington Beach pier to counter-protest a Ku Klux Klan rally on April 11. While the Klan rally did not occur, individual white supremacists came to shout racists messages and aggravate counter-protesters.

LA Times reported that BLM-Huntington Beach organized the counter-protest, despite the national organization releasing a statement before the protest saying that they do not support or affiliate with the demonstration.

Klan affiliates and Proud Boy sympathizers were seen at the Huntington Beach protest. Law enforcement declared an unlawful assembly for the demonstrators to disperse.

“We know that California is home to the most white supremacist groups of any state,” Abdula said. “It’s not surprising that the KKK thinks it can rise up. We have to remember to push back against white supremacy, or it will keep popping back up.”

“White supremacy exists in places like the LA Police Protective League. That’s where my focus is,” the co-founder said.

Abdula and BLM-LA continue to advocate for removing the LA PPL from the house of labor during their annual Wednesday protests outside the League headquarters.