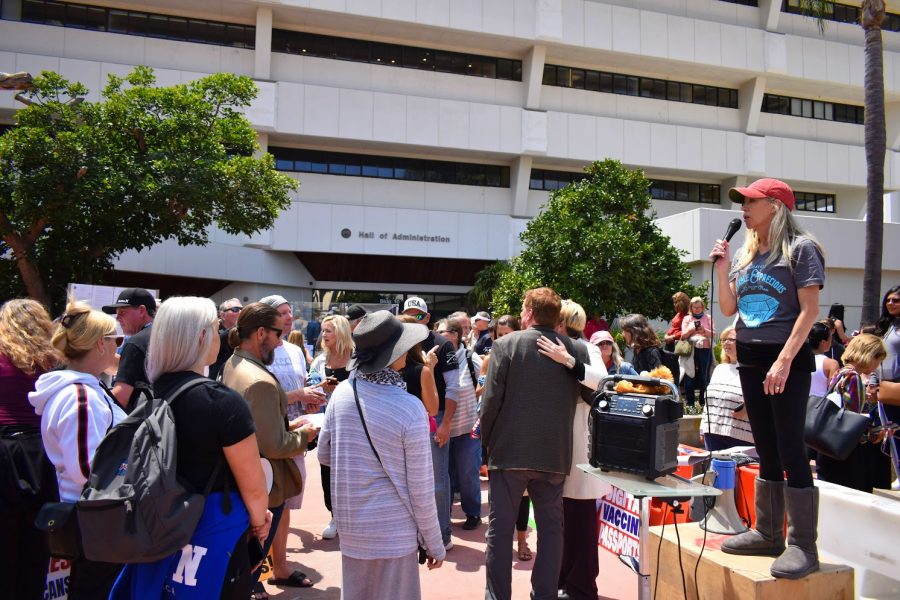 Martina Bowersox speaks to a maskless crowd as they protest the voluntary digital vaccine passport on May 11, 2021. Many protesters compared the voluntary passport to a Nazi regime.

Hundreds of anti-vaccine and anti-mask protesters gathered outside the Orange County Board of Supervisors meeting on May 11 to fight against a proposed voluntary digital vaccine passport.

Several protesters claimed the digital passport is a suppression of people’s freedoms. Many went so far as to compare the passport to how the Nazis made Jewish people wear yellow stars during World War II.

“It’s a socialist, communist, Marxist agenda. What happened with Hitler? He wanted to defund the police and infiltrate the youth. Isn’t that what’s happening now,” said California Governor candidate Sarah Stephens as she protests against a voluntary vaccine passport in Orange County.

Stephens has vocally supported multiple anti-vaccination protests on her Instagram page. In one video, where she attended an anti-vaccine rally at Los Angeles city hall, she claimed the vaccine changes people’s genes.

Many protesters, like Stephens, found ways to connect the passport to the Nazis.

“Asking people to provide their papers in order to function in society is very Nazi-like,” said Thomas Soratonic, Jr. as he waved a sign with a crossed-out swastika.

Orange County officials have stated that the digital passport is voluntary and is meant to replace paper vaccination cards.

“As I have previously stated, this was intended as a courtesy and not a mandate,” said OC supervisor Katrina Foley during the meeting.

“There is no vote to mandate vaccine passports. Anyone suggesting otherwise is directly harming the County’s public health and vaccination outreach efforts.”

Despite repeated statements from OC supervisors, protesters continued to fight against the passport.

Anissia Todd brought her daughter Tatianna,14, and Presley Romash,13, to the protest. Each woman wore a Trump hat with a large 45 on the side.

“It shouldn’t be required by law in order to get into businesses. It’s an infringement on our rights as Americans,” said Anissia. “They need to abolish it.”

As Todd made her statement, the voluntary passport had not gone into effect.

Many protesters waved Trump 2020 flags and bought Trump t-shirts and hats from a vendor on the street. The street vendor also sold Q-Anon t-shirts with the Trump merchandise.

The OC supervisors voted 4-1 that the effort to create a voluntary digital vaccine passport would be paused to focus more on giving people the vaccine.

“The voluntary digital record provision would have provided a convenient option for individuals, should they need to show proof of vaccination for access to businesses and entertainment venues,” stated Foley, the only supervisor who voted against pausing the effort to create the passport.

The board did not signal when the issue of the passport would be discussed again.