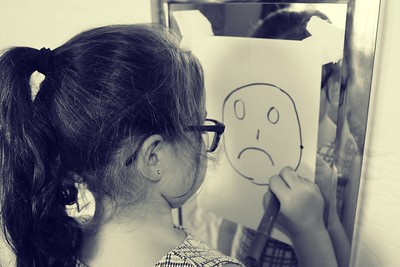 Little girl draws a sad face on a paper in front of her mirror. This facial expression represents how she is feeling in the moment.

The “myth” of mental health among minority families is far too common and negatively affects the children in those families. A variety of minority kids discuss how the lack of support and understanding from their parents has affected them and further hurt their mental health.

Ian Park, a 20-year-old Asian-American student, has struggled with mental health since freshman year of high school. He sought help from his parents but they did not take his needs seriously.

“I felt embarrassed,” said Park, as he discussed his issues.

Around his sophomore year in high school, Park sought medical help confidentially on his own to get better. He was diagnosed with depression and minor anxiety disorder.

He later told his parents about his condition and they made a big effort to understand him now.

“They are taking a serious look at me and trying to understand,” said the 20-year-old.

Park is currently going to a specialist who recommends therapy and other medicine. He advises parents to be insightful and try to understand where their children’s needs come from.

Hispanic kids also have a difficult time when it comes to talking about mental health in their household.

21-year-old Hispanic student, Andrea Gomez, has struggled with depression from an early age.

“My earliest memory is when I was three, I remember feeling like a burden or a threat to my family,” said Gomez.

Her parents never knew of her mental health issues until her teacher contacted them to discuss her suicide note found during her freshman year.

Gomez was institutionalized in a mental hospital for about five months.

“They kept gaslighting me and making it feel like it was my fault. They believed I was overreacting due to my recent breakup,” said Gomez.

Since Gomez did not receive any support from her family she would punch herself to cope or would take her anger out on her friends so they may carry her burden as well.

Gomez sought counseling her freshman year at El Camino College but it did not work due to a lack of counselors at the school.

She later sought professional help from a doctor and received dialectical behavioral therapy and other medicine for her diagnosed depression, anxiety and borderline personality.

Gomez’s parents still refer to her as “crazy” sometimes and still do not exactly believe she needs the help. Gomez advises parents to be open-minded and let their kids get the help they need.

Even young minority children are struggling with their mental health.

A Black and Hispanic 15-year-old started feeling stressed, depressed and increased anxiety when he was 11 due to lack of sleep and overdoing himself.

When he confronted his parents about this problem, he said, “They told me that it was not serious and I was just making lies up.”

The teen sought counseling from an adult who told him to not overdo himself. He also talked to his brother about being stressed and he helped him manage as well.

“There are days where I still go through being stressed and depressed but I am getting better as the days go on,” he said.

Mental health in minority communities and households are not looked at as a real condition but as a form of seeking some kind of attention, usually due to parents not being raised with awareness about mental health issues themselves.

These parents may continue to grow older with the same traditional tendencies they were raised were with as children.

Gladys Barrera, a 21-year-old Salvadorian student, has suffered from depression and anxiety while coming back from college during the pandemic.

Barrera says that leaving that freedom from a Hispanic household after having it once she left for college was really hard and it took a toll on her, as she is now remote learning and having to do house work that never finishes.

“It sucks that my parents expect so much from me and nothing is ever enough, and I can’t tell them how I feel because depression isn’t a real thing in our culture. They’ll just tell me I’m asking for attention or I have nothing else better to do,” said Barrera.

She explained that in her family, no one was really ever allowed to express their emotions, and “There isn’t time for nonsense,” as her parents would tell her since they believed depression or mental health was not a real issue.

Not just in her Salvadorian culture is it this way as well, it is like this in the majority of all Hispanic cultures, for the same reasons that there was never any attention brought to it years or decades ago.

Mental health has now become a more visible issue and fortunately more and more people, even celebrities have spoken about their suicidal thoughts, attempts or the downward spiral their mental health was in at some point.

Ultimately, mental health is something that needs more attention. For minority children, teens and even young adults, access to help needs to be available.

With help being provided and more accessible, they will feel more comfortable talking about it and seeking help even when it’s not available at home.