‘It’s our time’: Central Americans enrich food and culture in So Cal 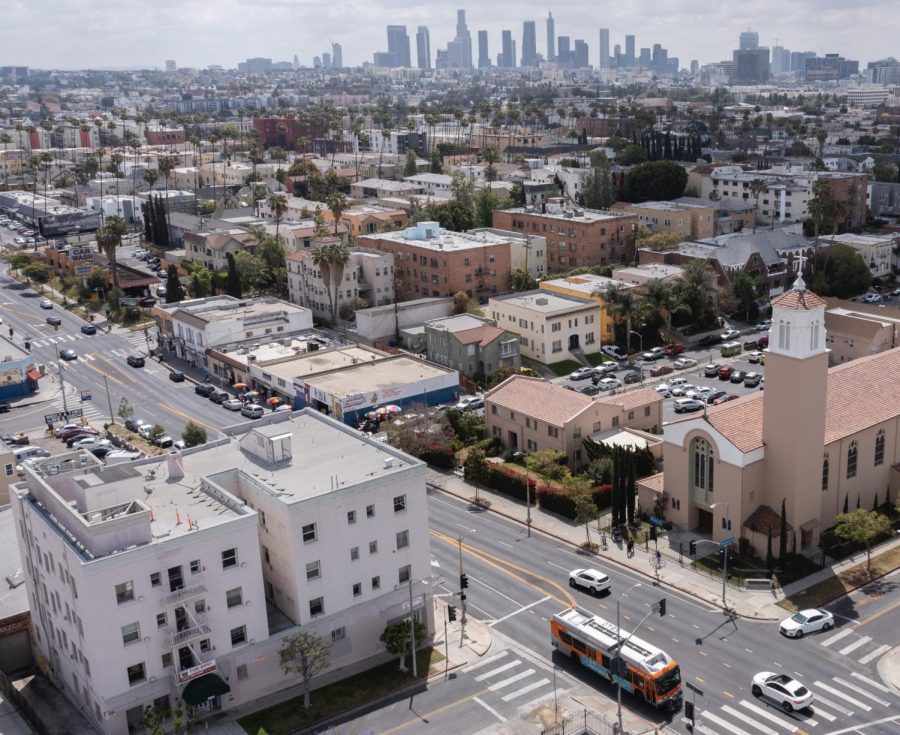 Just 10 minutes west of DTLA, Beverly Blvd is home to several Central American businesses. On April 25, 2021, a busy Sunday morning for many locals meant shopping and eating at places like Guatemalteca Bakery and Restaurant and Panaderia El Salvador.

As the border crisis and battle for immigration reform in the nation rages on, thousands of Central Americans have made Southern California their home, reshaping its landscape and cuisine by introducing remarkable food and culture.

Los Angeles is known for its vast cultural diversity and heavy influence from Mexican culture, but the “south of the border” influence goes beyond Mexico, and with hundreds of thousands of immigrants from Central America coming to California since the 1980’s, the lifestyle in LA has inevitably evolved.

People from countries like El Salvador and Guatemala have made SoCal a place that offers the community a taste of their Central American heritage.

Salvadorian natives like Isamar M., an employee at “Mi Pequeño Pulgarcito,” is grateful for the Central American culture in California. An immigrant living in LA for over a year, she found herself missing El Salvador until recently.

“For the past five months [the corridor] helped me because everything here feels like I’m back home, in Santa Ana,” she said.

In 2010, Los Angeles recognized the area between Adams Boulevard and 11th Street on Vermont Avenue as the El Salvador Community Corridor. The bustling neighborhood hosts a myriad of colorful Salvadorian businesses and gives them the opportunity to share their culture with people here in their new home.

For Central Americans, bringing their customs and way of life to California is how they keep their traditions alive.

In a nearby corner of LA, Maria Flores, a daughter of Guatemalan immigrants, has visited places like Guatemalteca Bakery and Restaurant with her mother since she was a child.

Today, Flores visits and reminisces about the food she said was great then and still is to this day.

“Coming back here, it brings back a lot of childhood memories,” she said, “It’s a happy place.”

Flores added that although she has not been to Guatemala herself, places like Guatemalteca have given her a small taste of her parent’s homeland and culture.

Guatemalteca Bakery and Restaurant has served authentic Guatemalan bread and food for over 45 years with three different locations in Los Angeles County.

Outside of the Guatemalteca Koreatown location, 4023 Beverly Boulevard, people can find a number of Central American restaurants, businesses and street vendors.

Brenda Robles, also a daughter of Guatemalan immigrants, is one of several vendors on who line the street with a rainbow of umbrellas serving and selling Central American food and other goods.

Robles’ specialty is the Guatemalan “Garnacha,” a tortilla topped with shredded beef, sauce, cheese, cabbage and jalapenos. She has made and sold the delicacy for 13 years.

Robles said she feels fortunate to have grown up and now work in a community full of Central American culture.

“It’s like a feeling of home; like we’re in our own little town,” Robles said, “Even Mexican people come here. We’re all Latinos. They feel like they’re at home too.

The community favorite is open 365 days a year and specializes in traditional Salvadoran bread, tamales and carries a variety of specialty products from El Salvador.

Perhaps the most popular Salvadoran food is the famous “pupusa,” El Salvador’s national dish. Salvadoran restaurant La Praviana, located in South Gate, has become well known for its pupusas and has built a strong presence in the neighboring community over the last 40 years.

Chelsea Sosa, 29, has come to love the food and Salvadoran culture she was exposed to while working with her mother at La Praviana.

“My dad is from Nicaragua and my mom is from Columbia, so I’ve gotten to learn about the culture because I work here,” Soda said. “I didn’t know what a pupusa was before.”

“I think that shines the light on even us, as Hispanics, we’re so enclosed to our own cultures that we forget there’s others.”, the 29-year-old said.

La Praviana takes pride in their authentic pupusas, and Sosa estimates they sell about 3,000 a week.

“It’s tough to find an authentic place because we’re not always big in numbers, they’re small countries, but it’s nice when you find a place, like La Praviana, that represents so much of a culture.”

While restaurants like La Praviana have been successful, Sosa mentioned a lot of other Salvadoran restaurants did not have the same fortune when the COVID-19 pandemic began. At least four local pupuserias in the area have closed in the last year.

Luckily, restaurants like VCHOS Pupuseria Moderna are paving the way for future generations to pass down traditional Central American food and culture.

Wendy Centeno was born and raised in Sonsonate, El Salvador, and has lived in the United States for 13 years. Eleven of those years were spent founding and growing her mobile Salvadoran restaurant, VCHOS Pupuseria Moderna.

Centeno, 35, said she was inspired by her love of food and love of her culture.

“I am 100% Salvadoran, born and raised there until I was 22,” she said. “So I saw a necessity to bring my food and my culture to the streets of LA.”

The Salvadoran native started with one rented lunch truck, driven by her husband Danny, and five years later they had purchased the two trucks that now run throughout So Cal. They plan to open their first brick-and-mortar restaurant in Summer 2021 that will be located in the city of Montebello.

“It’s our time to show that we are strong, and we can do a lot of things. Have a voice for Central America.”

For Centeno, VCHOS, which comes from the slang word “bichos” meaning “young people,” has translated her country’s traditional flavors into the mainstream.

“We are ‘bichos’ trying to bring food that people are familiar with, with a grandma in the kitchen, only now it’s us,” she said. “The younger generation bringing the authenticity and traditions here.”