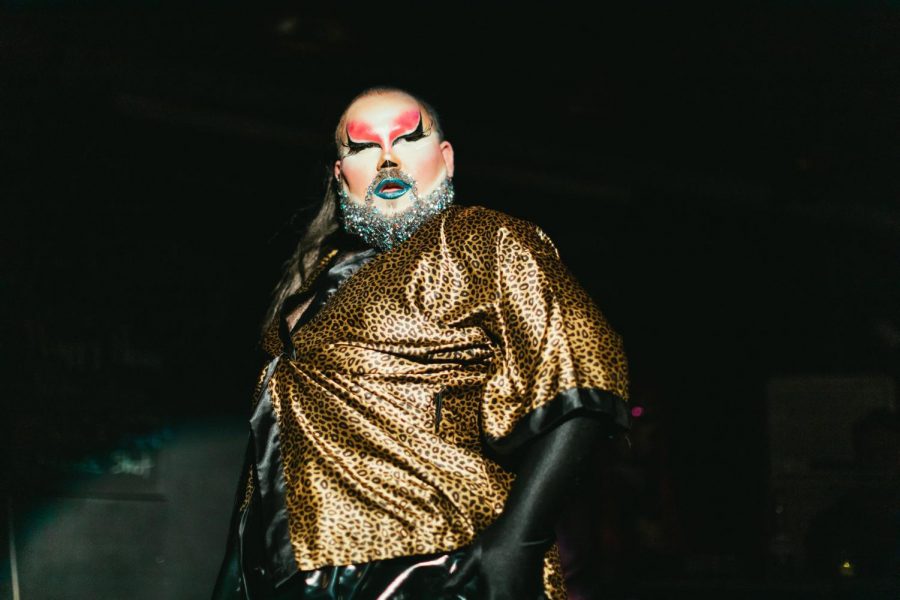 “I went to this bar and they were doing this competition. And then I was like ‘Oh shit! It exists here, that’s so cool. I have been watching [Rupaul’s] Drag Race and things on YouTube ever since I was young, and it was my first time seeing it in person.”

Eric Chai had just witnessed the drag scene in Shanghai for the first time, and remembers being blown away by it. The South Korean was living in Shanghai attending college and at that time, he didn’t really know about the drag scene there.

“When I went to college, I was pretty new about everything. I had already come out to my parents when I was in high school in Korea, but I never had any gay friends or been to any gay clubs before,” he said.

Eric described the whole experience as being fabulous, but also remembers he was apprehensive at first. He didn’t believe drag was something he could actually be able to do.

“I thought the drag scene was kind of cold. They’re not really there to coddle you. It was fierce, it was competitive. But being Asian, growing up in an Asian society I understood that and had to work my way up,” said the 25-year-old.

Eric decided to put himself out there and prove himself to people who were part of the scene. In 2017, he started dressing up in drag, going out to clubs and participating in contests and slowly getting his name out there.

“During 2017, when I really broke out into the [drag] scene, I told my parents — well they actually found out — and they were so shocked. They didn’t understand it and that’s when I cut off contact with them for a while,” said Eric.

His parent’s initial reaction might seem extreme to some, however, homosexuality still remains largely taboo within Korean society.

The government also takes a very conservative stance on this issue. Same-sex marriage is banned and there are regulations which make it very difficult for unwed partners to adopt children.

Same-sex couples are also excluded from the government’s definition of family, offering no family status or legal recognition. There are also no laws that protect sexual and gender minorities from discrimination.

Chai’s parents were finally able to come around and made up with their son, who then decided to move back to Korea to have a one-year break from school.

In Korea, Chai started performing at bars, including the Rabbit Hole in Haebangchon, one of Korea’s most diverse neighborhoods with a large population of foreign residents.

Despite the thriving drag scene community, Eric is aware that Korea is still really conservative and traditional in a way.

“I clearly have a big gap between my normal work self and my performer life. When I’m working, obviously, I don’t tell any of my colleagues or my boss — or anyone. Even if they understood, they’d still treat me as an outsider,” he said.

There are also a number of foreigners stamping their name in the blooming Korean drag scene. Nick Holmes from Kansas City, has been living in Korea for 10 years and first started doing drag four years ago in Korea.

When performing drag, Nick goes by “Maia P. Sparkles,” an exuberant persona with a shimmering beard covered in glitter and sports a sleek, high ponytail.

Nick had a strong Christian upbringing back home and even attended a Nazarene Christian University. “When I realized that I was gay, I was still Christian,” said Nick.

During his time as a university student, he struggled to accept his sexual identity due to his Christian faith. At that time he realized he was gay, he also experienced a feeling in which god  wanted him to stay celibate.

He was 22 years old when he finally accepted that he was gay and 24 when he decided to leave his Christian faith behind.

“The reason it took me so long, the way that I was raised, it was just never an option, so I never sat there and gave it a thought,” he said.

Nick believes that his experience being queer in Korea, has been different from that of a Korean queer person because he is an outsider. “Outside of work I am freely myself. I definitely think that’s mostly because I’m a white foreigner.”

He shared that most of the gay Korean men he knows have to live two separate lives. “They have family and friends that they’ve known their entire lives. Then they have their queer family and their queer friends — and those two worlds do not mix at all.”

In the workplace, Nick is more careful when it comes to disclosing his sexuality, mainly because of the lack of anti-discrimination laws in the country. He will usually have probing conversations with coworkers to get a general sense of how they might feel about it, before coming out to them.

“None of the Koreans that I work with that I have come out to have had a negative reaction to it whatsoever,” he said, “I have only come out to Koreans in a working environment that I knew I could trust. A couple of my coworkers know I’m in drag,” he said.

The 33-year-old believes there are three distinct stances on homosexuality amongst Koreans; with one extreme being dead-set against it, others who are vocally okay with it and those who who are whole-heartedly accepting.

“There’s also a huge generational divide in opinions, in regard to homosexuality and progressiveness. You have the older generation who are very conservative in most things and they are the ones who are running the country right now as well as the churches.”

Some believe that politicians oppose the LGBTQ community or remain silent on the issue because of the Korean church and its large number of voters they don’t want to risk losing, if they come out in support of.

Eric Chai shared a similar sentiment, “All the politicians, when they are asked questions whether they support gay rights, they kind of avoid it and say, ‘Not right now, that’s not our concern. Our concern is COVID, nukes or North Korea’. Even if all of those things are resolved I feel they are never willing to face the fact that we’re here and that we exist, which is really unfortunate,” he said.

“For now, it’s really difficult to exist as a queer person in Korea because people don’t take you seriously,” said Eric.

The fight for acceptance and equal rights for the LGBTQ community in Korea might seem bleak but there is hope for change amongst the younger generation.

A recent Gallup poll on same sex marriage in Korea, shows 73% amongst those in their 20s are in favor of it. That number jumps even higher amongst Korean women aged 18-29 with 82% in favor of same-sex marriage compared to 65% for men in the same age group.

Both Eric and Nick believe that visibility and representation of the LGBTQ community will further move the needle in the right direction.

“I think the biggest thing we can do is visibility,” said Eric. “I think that more than ever, more queer kids and young people and coming out and flooding social media. And the pride parade too, is a really great way to show people that we’re here and that we’re not just some freaks.”

Nick believes the best way for the LGBTQ community and allies to push against the homophobic rhetoric, is for more people to come out.

“Representation is super important. So the more people that come out, the more people will realize that they actually know people who are gay and it’s not just an idea to them. But at the same time that’s very easy for me to say,” adding that he recognizes how difficult it can be for a Korean to come out to their friends and family.

“I wish more people could do it because it would help things move along but coming out is a very difficult process and it’s not right for everybody,” said Nick.

The LGBTQ community does have some progressive leaders in their corner, and they are working on passing an anti-discrimination law through the legislature — something that would mark the first step to protecting the LGBTQ community in the country.

Members of the LGBTQ community and advocates know there is more work to be done, and believe they need to form a collective voice to have a better shot at creating the change they want to see.