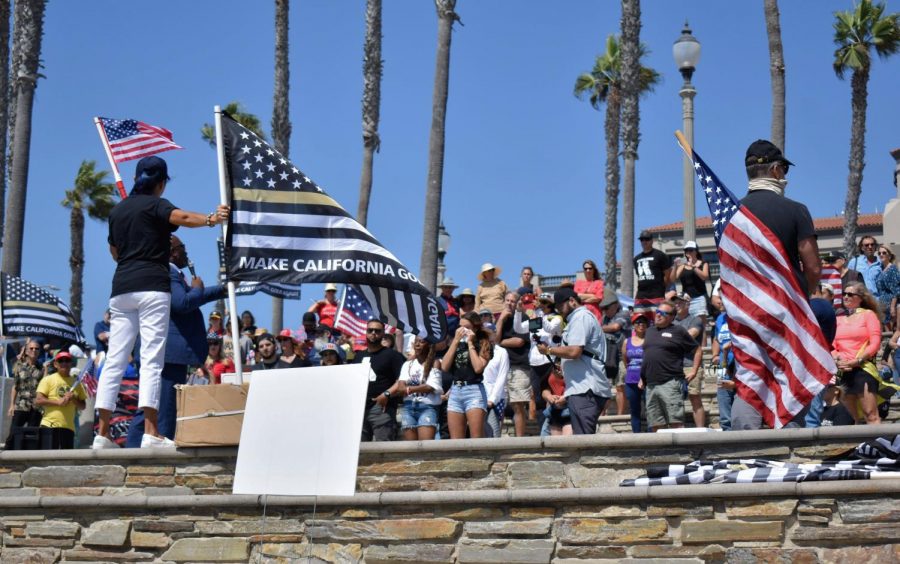 Protestors rally against California's mask and vaccine mandates in Huntington Beach on Aug. 29, 2021. They advocated for the recall of California Governor Gavin Newsom.

Supporters cheered as political figures and activists encouraged them to refuse the COVID-19 vaccine and fight back against the mask mandate.

Sarah Stephens organized the demonstration and gave voice to anti-science activists who called for supporters to “fight back” against the government.

Stephens also used the rally to promote her campaign for governor of California, with her slogan “Make California Gold Again,” which is derived from former President Trump’s slogan “Make America Great Again.”

The Republican candidate has utilized her platform and social media to spread disputed information to her supporters.

Many of her beliefs align with those of the QAnon group, such as suggesting that Planned Parenthood sells baby limbs and that the 2020 election was rigged for Joe Biden.

In an Instagram post, she wrote that 50 people per day are dying from the COVID-19 vaccines, but doctors have found no link between any case of death and the vaccine.

The Republican candidate also wrote that the vaccine causes miscarriages and infertility in women, but doctors and health experts have repeatedly stated that the COVID vaccines do not affect a woman’s ability to have a child.

Federal health experts credit the spread of information, like that of Stephens’, to the climbing COVID-19 death rate and low vaccination numbers in the country.

Huntington Beach Police interrupted the rally to remove the speaker’s microphone because the event did not have clearance for a microphone. The demonstrators booed and cursed at the law enforcement officers, but minutes earlier the demonstrators were waving their “Blue Lives Matter” flags with pride.

After, the Republican pastor took to Instagram to encourage her supporters to continue spreading disproven information.

Stephens also took part in the anti-vaccine protest at Los Angeles city hall on August 14, where hundreds of protesters voiced their outrage against wearing a mask and getting vaccinated.

Fights later broke out between counter-protesters, leaving one person stabbed and a reporter beaten.

“I feel like it’s January 6 all over again,” said Stephens as she took to Instagram to celebrate the protest.

Ernby ridiculed Governor Gavin Newsom, calling him a dictator for shutting down the state during the pandemic.

“I’m sick of watching Gavin Newsom, our dictator, shut down our schools, shut down our businesses, shut down our churches, and I’m really sick of the fact that criminals have more rights than law-abiding citizens,” said Ernby as the audience cheered.

Newsom enforced strict restrictions on businesses and places of large gatherings to reduce COVID-19 cases in the state.

The deputy district attorney encouraged people to vote for conservative Republicans in office and discussed getting supporters to campaign in their neighborhood.

“We created teams and little armies to go through and knock on doors and make phone calls,” said the OC deputy district attorney.

San Jacinto council member and candidate for congress in California’s 36 District, pastor Brian E. Hawkins, was also at the event but took a more moderate approach to the demonstration. He did not endorse any candidates and stated that he is fully vaccinated.

Hawkins said he chose to participate in the Freedom Rally to support free speech.

“You don’t want to be at a rally where everyone agrees, even my campaign has democrats on it,” Hawkins said. “Everyone has a right to freedom of speech.”

If elected, Hawkins wants to address the issue of immigration, and give people a clearer path to citizenship.

“This country is built on immigration, they shouldn’t be denied the freedom of America if they come in the legal way,” said Hawkins.

While Hawkins did support immigration reform and was open to hearing ideas from both sides of the aisle, he did state that he is against critical race theory and supported former President Donald Trump.

Stephens and other Republicans have voted to recall Governor Newsom, over his handling of the pandemic.

While some members of the party do not align with Stephens’ ideologies, many are in favor of lifting the mask mandate and banning vaccine mandates in the state, despite advice from doctors and state health officials.