The man behind the mask: the skeleton of color 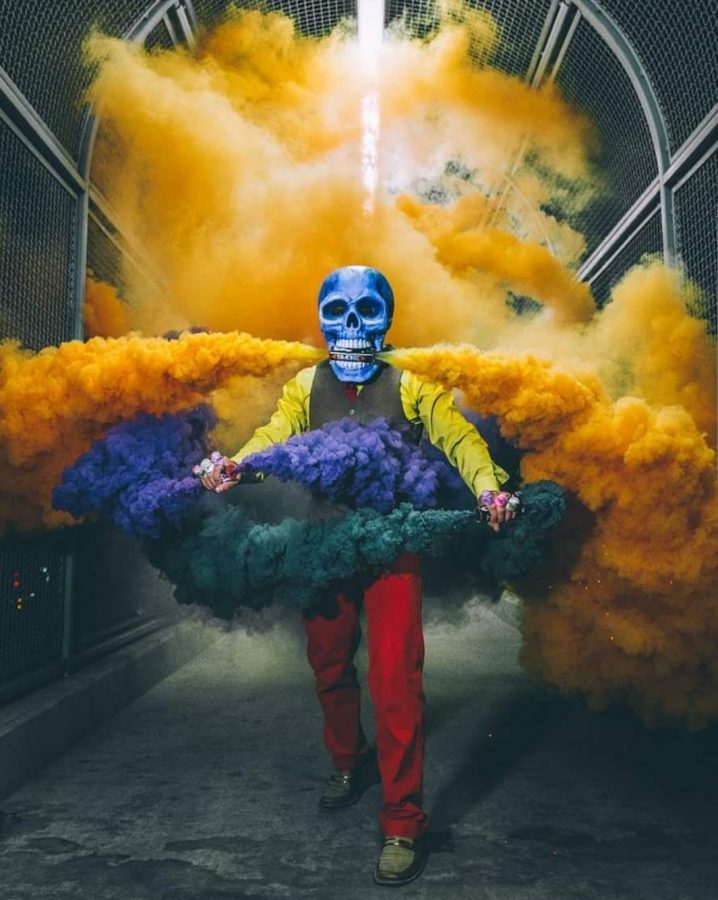 From out of the cover of brightly-colored smoke, a man with a giant skeleton for a head emerges surrounded by vivid neon colors, and masked behind a Dia de los Muertos calavera. One might wonder where an artist like this develops his skills.

It may be surprising that Cerritos College helped him find out who he was.

Better known as the Skeleton of Color, Butch Loscin is a performance artist who specializes in vivid displays featuring himself in brightly colored suits surrounded by smoke in erossing settings all over LA.

He attended Cerritos College in past semesters as a fine arts major and plans on continuing his education here.

He has become so outstanding in his art form that he was recently featured in a music video by the famous American rock band Fallout Boy.

The video, “Hold me Tight or Don’t” features Loscin quite prominently, showcasing his art of smoke and colors in time with the music.

Loscin has an intent to get a studio arts degree to transfer out. Though he began school as a kinesiology major as a result of being a personal trainer for a few years, he ultimately decided against it.

“As I started taking my classes at Cerritos, I was really settling into a lot of the art classes. “I just really dove into them and it’s really manifested itself in me.”

According to Loscin, what started his passion for art was, “finding out that I was able to do it.” He says that he had always been interested in the fine arts, especially drawings and such.

He stated it was his exposure to art at Cerritos College that inspired him.

After taking a few art classes at Cerritos, he began to see what he could really do. “I started to be able to do it myself. It was just one of those things, where I really fell in love with it.”

While his passion for art grew, Loscin began to wonder how he could use his new found skills. He started thinking about his career in college, saying, “Well, in school, I was looking at myself, thinking, ‘How am I going to make a living with this?’ And I started looking at situations where previous artists were successful, and I wanted to emulate something I saw for myself.

“One of the things I really saw was how an artist has like a brand name, or a distinctive look. Something that really just stands out, that makes them who they are. So as I started creating ways for me to be successful.”

According to him, he looked at the world around him for inspiration. What he saw here in our own Los Angeles was the Day of the Dead holiday. It was with this that he finally found what he was looking for, a way to express himself in his art.

One thing about the Mexican holiday that intrigued him was the calavera, or sugar skull.

“For me, I always liked the sugar skull. I didn’t really know what Day of the Dead meant, I just thought it looked cool. But as I started investing more time, listening to people, what they had to say about it, Mexican people, I really started liking it and then kinda adopted it for myself.”

Loscin then took it further from there. Adding colored smoke and interesting visuals, he crafted the persona of the “Skeleton of Color.”

He then used social media as an outlet for his art, saying, “Social media is such a big game changer for me, having such a huge following. People have to understand that I knew a long time ago when I first started this that I need to have an Image, which was for me the sugar skull, the smoke grenades and the outfits.”

Now, Loscin had to find a way to get himself out there. He found a team of photographers, who identified themselves as a community.

They were willing to photograph him, as he would perform at their community gatherings. After receiving professional grade photos of himself in his persona, he posted them online to market himself.

“That’s how I got in touch with Fallout Boy. They found me through my Instagram page, and they liked what I did. They hit me up and the rest is history.”

Loscin has some encouraging words for students looking to do something similar.

“You have to identify what you want, what you need and realize how you achieve it, and chances will appear. That’s how it always happened to me.”

Loscin stated he found a way to success using
his creative talents. According to him, Cerritos College helped him find what
he wanted to do.