Teaching by day, rocking by night 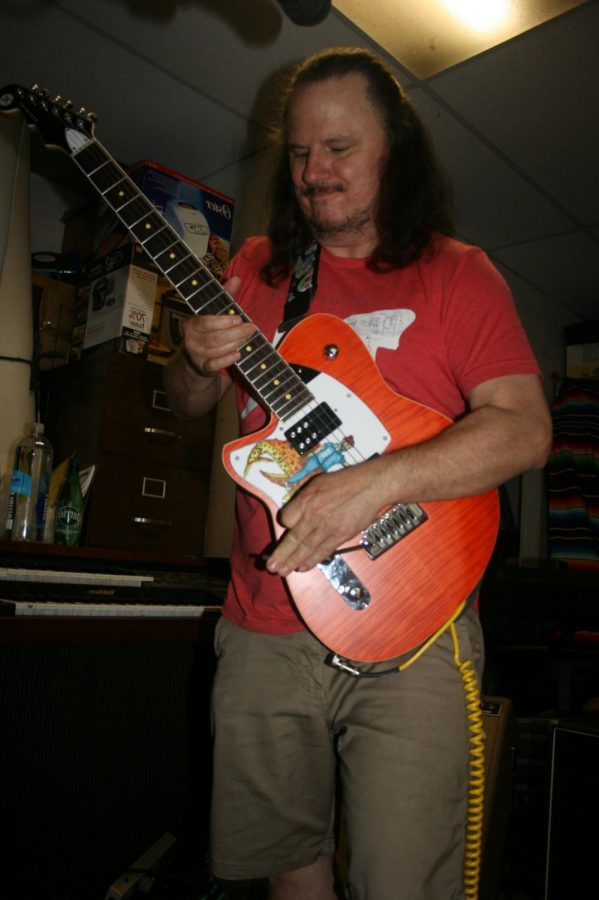 Cerritos College anthropology professor Mark Abbruzzese has been a part of faculty since 2005.

A considerable number of Cerritos College students simply attend their classes, do the work, write down notes and only speak with their professors when necessary, but as students were asking about their grades did they ever consider asking the professor about his or her hobbies?

From archaeology to witchcraft, if you took it, he taught it.

However, besides being seen in front of a classroom with a skeleton hanging behind him, Abbruzzese can also be seen on-stage in front of a crowd with band mates playing alongside him.

The professor recalls his first experience in a band, “So I was like 10 or 11, I mean if you can call it a band, it was like three of us at my friend’s house doing cover tunes in our version, which was pretty rough, they weren’t really ready for people to listen to so that’s how that started and along the way I learned different instruments.”

Being an eclectic soul, Mark has played a range of genres throughout the years with rock being a staple.

He has played metal, heavy metal, death metal, rhythm and blues and some folk in the 40 bands that he has been a member of.

The band that Abbruzzese is currently a part of, The Bilmurrays, is only a year old having been started sometime in July 2017.

Mark knows how to play the guitar, piano, the clarinet, which he picked up while in marching band, and “a short little foray into drums, which lasted about six months, maybe less, because it was very loud and my dad made me sell them, he didn’t like me having the drums, but at least I learned the basics.”

Abbruzzese has played at small festivals, The House of Blues, the Whiskey a Go-Go, the Doll Hut and the Viper Room. One of Abbruzzese’s goals is to play at the South by Southwest Festival.

Abbruzzese recounts how he and his fellow bandmates came up with the name, The Bilmurrays, “One night we went to go see a band that we like, Super Chunk, up in L.A., this was like two months ago and we were talking about Bill Murray because we all like Bill Murray.”

He continued: “I actually have a picture of Bill Murray on one of my guitars, and so somebody said, ‘what about The Bilmurrays?’ and I’m like, ‘yeah, that’s cool.’ and then we had to think about, well we don’t want people to think that we are Bill Murray or we are doing a tribute to him, so we changed it slightly and we all like to joke around and stuff so it seemed like a natural fit.”

The Bilmurray’s have not made their debut as of yet but hope to start playing gigs sometime in late spring, early summer.

Abbruzzese discusses the band’s current progress, “we have six songs now, most places give you half hour to 45 minutes some places give you more, that’s pretty typical now, that was started with festivals like South by Southwest and all that so most bands depending on how long your songs are gonna do five, six maybe seven songs, I like to have like eight so that way we have a couple extra in case they want us to play more.”

The guitarist and vocalist also mentioned some of his personal goals for the band, “start playing regularly, record an album and play South by Southwest, those are the three that I would like to do. ”

Abbruzzese’s main form of motivation throughout life being his friend, Kevin.

It was on the behalf of both Kevin and Abbruzzese’s mother that inspired him to pursue music.

Mark recounts, “When I was very little my mom used to sing to me all the time… and she used to encourage me to sing… I would show them [lyrics] to Mom and she would like, ‘oh, put this word, that’s a better word than this word,’ so that kind of got me into music in terms of that.

“The other major influence would be my friend, Kevin, when I was maybe 8, was the first time I heard Black Sabbath and all these different bands, I was even getting albums at that time because he was four and a half years older than me so he was into this stuff and he would turn me onto it and almost nobody my age would know about this stuff so he kind of pulled me along per say, he didn’t play music but he loved music in a way that is comparable.”

Abbruzzese was this close to not pursuing college in general, let alone teaching at one, he states, “I haven’t always had the discipline in the things you need to do academically to make that [attending college] happen, but to be fair, I lived in a world where college was never a thought, that was just never going to happen for me.”

“So I had this mix of things [classes] and the counselor would go crazy like, ‘You need to pick a major, what are you going to pick?’ and one day he looked at my stuff and he saw that I liked all that diverse set of classes and he goes, ‘what about anthropology,’” Abbruzzese said.

He continued: “I vaguely knew of anthropology so then he explained to me what it was and there’s physical anthropology, archeology and linguistics and I’m like, “cool” and I took my first class which was an archaeology field class and about two weeks into that class I knew that it was for me and then it clicked, that got me into anthropology.”

Abbruzzese shares how he balances music and teaching with a chuckle, “Yes, it can be difficult but there are certain things, when I first started, I remember teaching at Irvine my first summer, my first classes and it was cultural [anthropology] and physical [anthropology] back-to-back, and that’s all week long because it’s compressed.

“It was wiping me out and I was teaching, doing notes and doing grades continually, and I was concerned whether or not I can do this,” Abbruzzese said. “I talked to the chair of the department and other people who said ‘once you get further in and you have more experience with the teaching and the grading, it will get easier, you will start building like a system,’ and that’s exactly what happened.”

The musician recalls a moment that really stood out in his musical career, “Five years ago we played the Key Club in Hollywood on the strip, this promoter that I was talking to had a gig coming up with U.F.O, and U.F.O is one of the iconic metal/hard rock bands of all-time and he said, ‘do you want to do it?’

“I’m like, ‘Yeah, I want to do it, of course I want to do the gig.’ We got to play, we didn’t open for them, we were the band before that and that was just massive,” Abbruzzese said.