Donation based yoga- more than just exercise, it’s medicine for the soul! 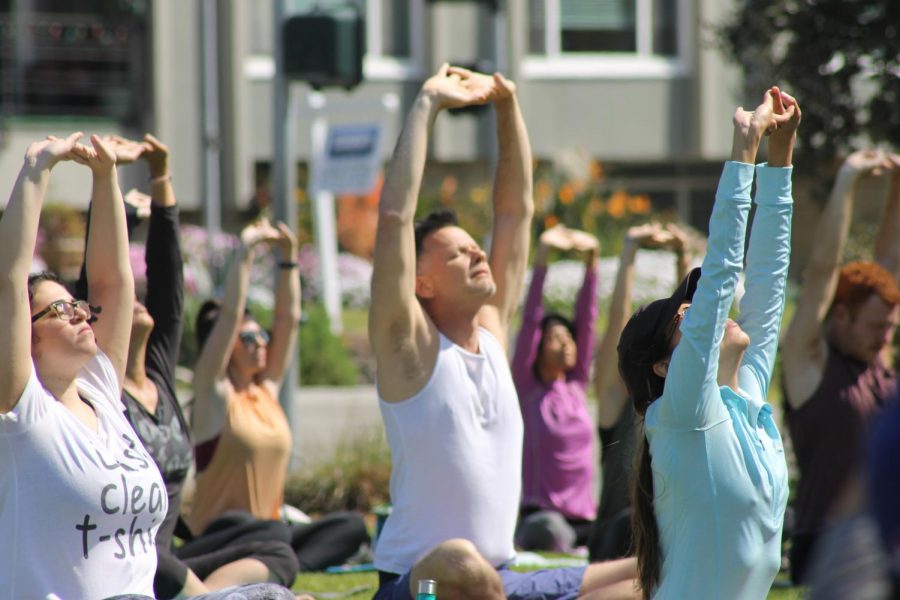 Throughout the Los Angeles county, countless people are coming together in the spirit of health and community.

Something powerful is happening every day in LA. Whilst everybody knows that LA is the place for life-changing auditions, wild clubs, celebrity sightings and your shot at making it big, more recently, it has become the place for yoga!

This is not just yoga in high-end studios that cater to the privileged, but yoga in parks and canyons, and in studios from Santa Monica to the inner city with participants of all shapes, sizes, ages and demographics.

Donation-based yoga is a newer facet of the yoga craze that has taken hold of the area and is a powerfully equalizing component.

Looking at the act of yoga, we often see people shy away from yoga because they think they aren’t flexible enough, however, at a recent yoga class at Long Beach’s eponymous Yoga on the Bluff, instructor Erin Grissom, shared her thoughts about these types of sentiments.

She said, “I love it when people say that they don’t do yoga because they aren’t flexible enough. That’s like saying you’re too dirty to take a bath.”

Yoga offers something entirely unique in the health, wellness and fitness industries–the concept that you are right where you are supposed to be and if you meet yourself there you have already succeeded.

It has been said that yoga empowers you to be present with yourself and your circumstances and gives you the tools to handle life’s adversities.

Long Beach-based yoga teacher Blak Watter, said, “Yoga has allowed me to navigate life, because I think that’s the most important element, being able to deal with the challenges in life, yoga’s helped me to breathe through it.”

The core tenet of yoga is presence and quieting the mind, something that our hectic communities can sorely lack in.

This new form of yoga offers an escape from the struggle of life, as one need only follow along with poses to the best of their ability and breathe through it all, without the financial stress of affording the class.

Donation-based yoga has taken root in cities all across Los Angeles, from Long Beach to Boyle Heights and beyond, you can find studios and parks offering daily classes.

Yoga is no longer something that only those with extra disposable income can enjoy.

Yoga student Jessenia Galvan-Lloyd, who has been practicing at Yoga on the Bluff in Long Beach since January, has experienced a huge improvement in her back.

She said, “I’ve done yoga very sporadically throughout my life, I started with my grandma when I was a little kid but it has never been a consistent thing. I can come here for free, that’s a huge part of why I’m more consistent now.”

Many of the donation-centered yoga studios also offer extra health and wellness classes such as reiki, known as energy healing and tai’chi, also on a donation basis.

In addition, many offer yoga classes in English and Spanish, serving their communities’ individual needs, regardless of their choice of language or cultural background.

Donation yoga also creates calm community spaces; something that LA is notoriously lacking in. Although LA does have public squares, gardens and museums, they are often busting and surrounded by noise that makes it difficult to relax. With this new movement, LA now has a thriving donation-based yoga community that has one goal, calming the mind and allowing for a detachment from the noise of the city.

Blak Watter notes that Yoga on the Bluff in Long Beach has united a lot of people from different backgrounds.

“I hear people reference it all through Long Beach. Personally, it’s helped me connect with Long Beach more.

‘I’m not originally from Long Beach and I didn’t really have the connection with Long Beach that I have now, through yoga,” he said.

He went on to speak of the connections built through yoga, saying, “If it wasn’t for that experience, sharing and holding space with people, certain people I know on the street that I come across, I probably wouldn’t have the same relationship.”

All are encouraged to check this the movement out, as it is for everyone. Countless more spaces are popping up and each offers something unique and meaningful.

It remains to be seen how much more this movement will grow, but it is hoped that it only continues to increase.