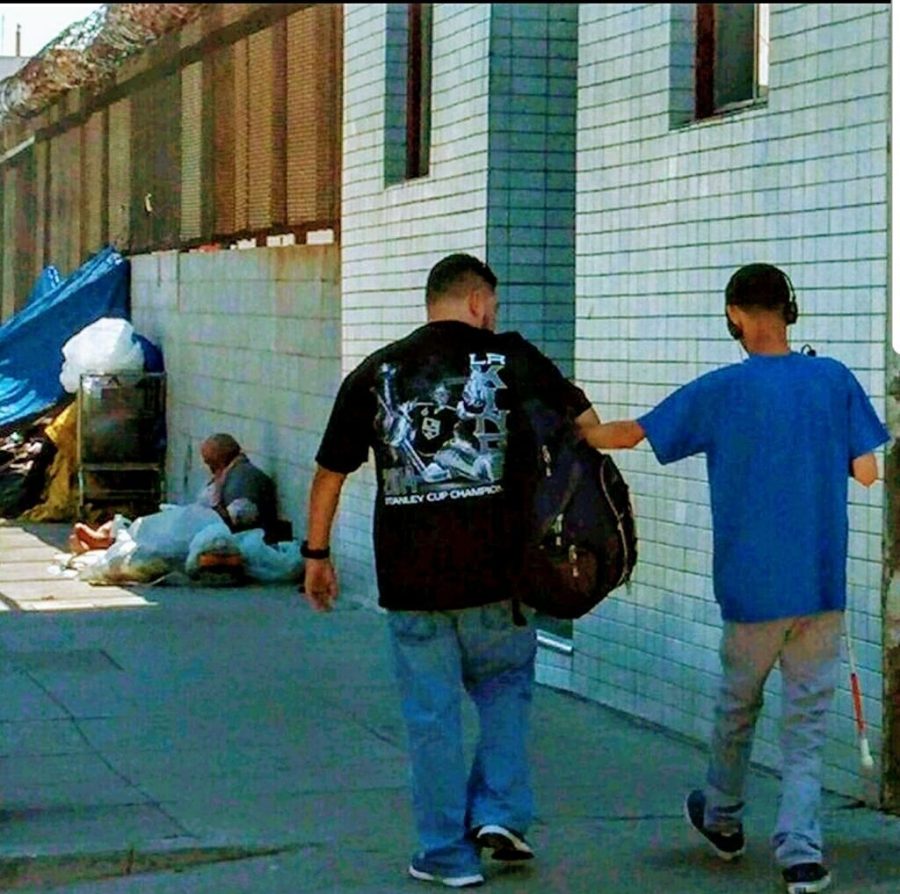 Paul Avila says his 22-year-old son Pauly is his inspiration.

“Pauly can’t see or talk,” Avila said, “All he can do is hear so he loves music.”

Hoping to make a difference, Avila launched Pauly’s Project nearly six years ago after realizing his son still had a powerful gift to offer.

“I remember one day I saw this [homeless] man with headphones. And I thought of my son Pauly because he loves music,” Avila said. “A few days later I started Pauly’s Project, and it just grew from there.”

Avila and his organization began with handing out radio headsets – a way for homeless Angelenos to hear music, news and sports. But today, Pauly’s Project has expanded into dozens of volunteers donating and delivering much-needed supplies every weekend to those living on the street.

Avila said, “The number one [motivation] is obviously my son Pauly, but I also had an uncle. His name was Alfonso and he lived on Skid Row, he was homeless.

“As a young child, I would go down there and I would take him supplies so he had a big influence on Pauly’s Project.”

Avila also recognized his mother as an influence.

“She has the biggest heart, and she instilled that in me as a young child to always give back to others.”

Avila stated his organization with full focus on Skid Row the first two years but the last four years he’s moved into the outskirts of Downtown LA where other homeless encampments need one-on-one attention.

“When we first started Pauly’s Project, it was just strictly the radios and a way for people to connect to music,” Avila said, “But nowadays we give hygiene kits, clothes, food, water, blankets and pillows.”

Jacob Baruch is the founder of Project Coffee Cup, a non-profit organization with a similar mission to end the cycle of homelessness.

“We do this in Los Angeles one cup of coffee at a time,” Baruch said. “The cup of coffee is our way to connect with the people like humans and not less than because of their circumstances.”

He continued, “We are here to empower our homeless neighbors toward lifelong personal growth, and to create in them a sincere belief in themselves through love, compassion and straightforward conversations.”

Baruch says his staff is full of personal comeback stories and many have experienced deep hardships, but they didn’t give up.

“Partnering with Pauly’s Project has been an honor. That guy is an inspiration to me,” Baruch said. “He’s extremely patient, genuine, and his love for his son is a reflection of his passion to help others going through struggles.

“I love that guy. We share the same passion for helping people and being a voice for the voiceless,” he said.

LA on Cloud 9 is another non-profit organization that was established in 2013 by its founder and director, Claudia Perez. She spoke fondly of the work she’s accomplished with Avila and Pauly’s Project.

“Since we are both on the same mission, helping people experiencing homelessness, our organizations teamed up to make a bigger impact,” Perez said.

The origin of LA on Cloud 9 was inspired by Perez’s own personal experience with homelessness.

Back in 2010, Perez was displaced for a whole year full with struggles.

Perez’s recalls her homeless experience on being addicted to drugs from a really young age and not having a stable place to live.

“It was bad, I did what I had to do to survive and to get my drugs,” she recalled.

Perez remembers her experience living in the streets where she was sexually assaulted and where she also traded sex for drugs.

“I became homeless because of my drug addiction. Back in 2009-10 is when I hit rock bottom; I was highly addicted to meth,” she said.

“I started bouncing around friends’ homes to the point where I was literally homeless, I had no where to sleep so I stayed on the streets,” she confessed.

Everything changed around February 2010 when she met her current husband. Perez was able to get back on her feet and able to start a new life by creating this organization along with a friend.

“Thanks to him [my husband], I was able to get off the streets, he is the total opposite of what I was back then,” she said, “He does not drink, do drugs or anything like that.

“He helped me overcome and thanks to him I’m doing better in life now,” she recalled.

LA on Cloud 9 dedicates its services to the homeless, low-income families and stray animals in Los Angeles County.

The services provide basic necessities such as tents, hygiene supplies, clothes, food and sleeping bags for those in need.

LA on Cloud 9 is also involved in activism work also and spreads awareness at rallies, marches, protests and especially in schools about “homelessness, the importance of compassion and helping people in need,” according to Perez.

“[But] it’s pretty amazing to see how both LA on Cloud 9 and Pauly’s Project have a great relationship with the same people we work with. The reaction of those we help seeing us together is priceless,” she said.

Perez continued: “We’ve done many events together, reached together and it’s been awesome these past [years]. We’ve been knowing each other for a long time. And it’s been great, we’ve never had an issue because we understand each other’s differences and we’re on the same mission.

“When you do something for someone, do it from the heart. Don’t expect anything in return,” she said.

Perez’s journey from hardships such as living on the streets to helping people in need has not been an easy task.

“I hope people understand that everyone needs human kindness, we all need that regardless if you’re homeless or not,” she said. “And just [by] visiting or walking by a person who is experiencing homelessness, even the simplest acknowledgment like saying ‘hi,’ asking for their name or starting a conversation, you never know you might save someone’s life by doing that.”

Avila of Pauly’s Project holds an annual event around the holidays to provide meals, supplies and musical instruments to the homeless. He hopes to grow this event going forward and plans to partner with businesses to provide more resources for those living on the streets.

If homelessness is going to end in LA, Avila says everyone has to get involved.

“We can all do something,” he said. “And, it’s not just me, it’s the whole team. When I first started Pauly’s Project, I came in one single car. Now we have 15 cars. It just grows.”