Stepping onto the pitch 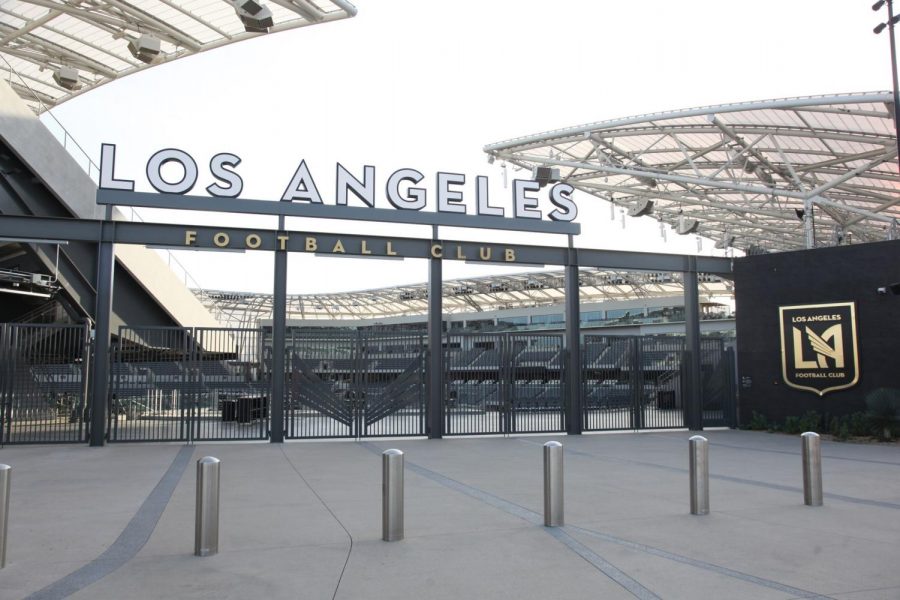 Los Angeles Football Club is an American professional soccer franchise based in Los Angeles that competes in Major League Soccer as a member of the Western Conference. LAFC play its home games at the Banc of California Stadium in Exposition Park.

On Oct. 30, 2014, MLS awarded a new expansion team to Los Angeles, filling the vacancy in the market created by the dissolution of Chivas USA three days earlier.

On May 17, 2015, the team chose the Los Angeles Memorial Sports Arena site to build a 22,000-seat state-of-the-art stadium for the MLS in Exposition Park, costing $250 million.

On Sept. 15, 2015, the club announced that Los Angeles Football Club, which had previously been used as a placeholder, would become the official name of the team.

The environmental impact report, arena demolition and stadium construction were expected to take three years and delay the team’s debut to 2018.

LAFC announced a 15-year, $100 million naming rights deal with Banc of California. Demolition of the Sports Arena began after groundbreaking of the stadium and was completed in October 2016.

The club’s colors and logo were unveiled at Union Station on Jan. 7, 2016. The nickname is in a black and gold font which are the club’s primary colors.

The Art Deco-inspired logo has a winged “LA” monogram with the words “Los Angeles” and “Football Club” in Neutraface. The crest was designed by Matthew Wolf.

In July 2017, Bob Bradley was announced the head coach of LAFC, John Thorrington became the general director to search for players. Mexican midfielder Carlos Vela was signed as the first designated player on Aug. 11, 2017.

On Jan. 31, 2018, LAFC announced that YouTube TV would be the club’s jersey sponsor in addition to broadcasting its games in English.

On March 4, 2018, LAFC played its first game against Seattle Sounders FC at CenturyLink Field in Seattle. Designated player Diego Rossi scored in the 11th minute to give the Black and Gold the 1-0 win.

On March 31, 2018, LAFC lost its first game against LA Galaxy at StubHub Center in Carson. LAFC gave up a 3-0 lead to lose 4-3 to their L.A. rival in Zlatan Ibrahimović’s debut in MLS. LAFC shares the Los Angeles market with the LA Galaxy; the rivalry in nicknamed El Trafico or The Traffic in Spanish.

On April 29, 2018, LAFC played its first game in the Banc of California Stadium against Seattle Sounders FC. The Black and Gold won the game 1-0. Laurent Ciman scored in stoppage time in front of a sold-out crowd of 22,000 people.

On Oct. 6, 2018, LAFC clinched their playoff spot after a 3-0 win against Colorado Rapids at Dick’s Sporting Goods Park in Commerce City, Colorado.

LAFC accomplished the best regular season for an MLS expansion team, earning 57 points. LAFC placed third in the Western Conference, however in its first playoff match the black and gold was eliminated by Real Salt Lake by losing 3-2 at Banc of California Stadium.

The chairman and CEO of LAFC is Peter Guber. The former National Basketball Association executive Tom Penn is president and venture capitalist Henry Nguyen is vice-chairman.

All LAFC matches that are not televised nationally are televised locally in Spanish on UniMás KFTR 46. Also YouTube TV carries LAFC matches. LAFC is the first U.S. sports team to have broadcasting rights through an online streaming service as opposed to a traditional television broadcaster. Max Bretos is the play-by-play announcer.

LAFC president and co-owner Tom Penn talked about the We Are LAFC documentary available on ESPN+, “We faced a unique challenge to create absolutely everything from scratch, so we engaged our most passionate fans and supporters and involved them in each step of the journey. ESPN+ and Mandalay Sports Media did a terrific job of telling the story of our historic beginning.”

When Vela was interviewed he explained the differences of the Los Angeles rivalry with other rivalries he has been a part of. He said, “You live each rivalry in a different way. We are just starting to build a rivalry.

“However, I think we have seen a lot of goals, a lot of emotions. That’s why I believe everything is going well, and we are well on our way to have a lot to talk about every time we both face each other, so our supporters can truly enjoy it.”

Thorrington talked about the transfer of Rodolfo Zelaya from Alianza to LAFC this off-season, “Rodolfo is a proven goalscorer, both at the club and international levels, and he will add another dimension to our attack. Along with our supporters, we are excited to welcome him to Los Angeles and integrating him to the group as soon as possible.”

Zelaya, who holds a green card and will not occupy an international slot, will be added to LAFC’s roster pending receipt of his International Transfer Certificate (ITC). LAFC signed forward Zelaya to a two-year contract.