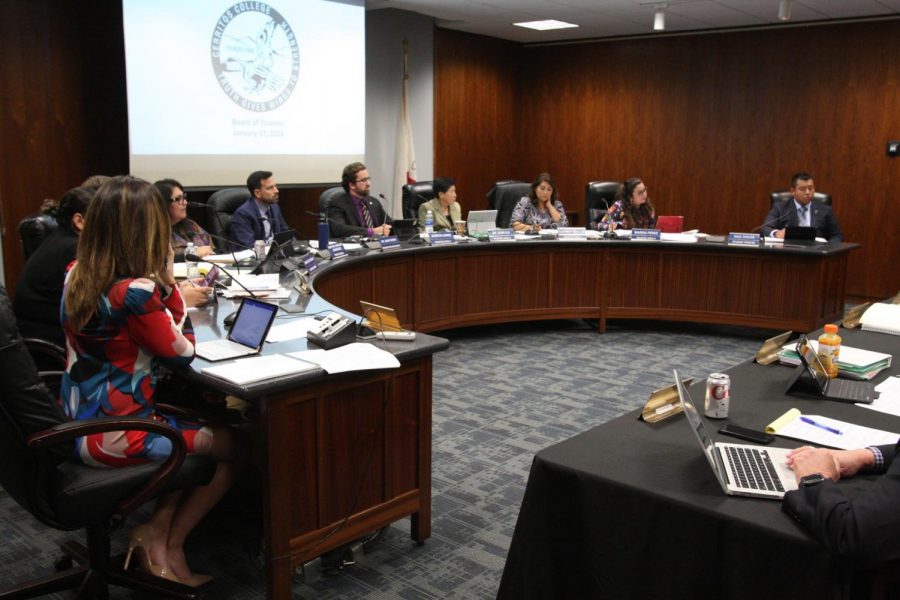 The Board of Trustee same to a had a controversial night as they meet with a packed room of students and staff. They unanimously voted against agenda item 33, to not renew Zebra Coffee contract.

Zebra Coffee not extinct on campus, to remain another year

The Board of Trustee have voted to extend the contract with on-campus food vendors until the Spring 2019 semester, mainly the threatened Zebra Coffee.

The proposition came after a survey was sent to evaluate satisfaction with food options on campus.

The owner of Zebra Coffee, Shaun Paek’s over-20 year presence on campus earned him support from professors and students who spoke on his behalf at the Board of Trustees meeting held Wednesday Jan. 17.

Associated Students of Cerritos College senator Robert Campbell said, “They’ve been faithful to their contract and I think that we should reciprocate.”

During that time, Shaun has actively supported the Cerritos College Foundation and has provided stable and well-compensated employment to thirty students.”

Priscilla Duarte is one of the students Paek has employed. Duarte said addressing the board, “We don’t just sell cups of coffee, we sell cups of love.”

Crowds gathered inside and outside the boardroom to hear the boards decision. Others came to speak to the board and ask for their reconsideration on the matter.

Those who attended the meeting included professors, students and other on-campus vendors. Many speakers asked the board to consider redoing the Request for Proposal for food services process.

Many thought the process was done unfairly since faculty, students and staff voices were not accurately represented in the process.

The email by Stolze which had shared with Talon Marks and read to the board included 24 faculty signatures. Stolze, with the help of economics professor, Solomon Namala, also began a petition to keep Zebra Coffee which had many more signatures.

Stolze continued by writing, “This is devastating news to us. We are loyal customers of Zebra Coffee but were never consulted in this managerial decision-making process.”

Speaking to the board, Stolze concluded by saying, “Please demonstrate to us and the college that we are a fair, just and genuinely a community college”

Board member Carmen Avalos said, “Going back to redo the RFP process is the right thing to do based on what we have heard here tonight.”

Another reason many wanted the board to reconsider taking action against the current vendors is that the proposed vendor was not local.

Cerritos College has been an advocate for hiring local companies instead of large corporations.

Avalos said, “I think I am very proud of this board in the sense that we continue to advocate for local folks and that has not changed for us.”

The food vendor being considered to replace Zebra Coffee and possibly others would have been Campus Food Services, Inc. Many people were concerned with the proposed vendor because it would have been responsible for seven out of eight available locations on campus.

Avalos said, “I think it was very clear that the board and certainly the folks here did not want just to have one person running the seven locations.”

Namala said the amount of locations taken over by the proposed vendor would have been taking created a monopoly on campus and would have not been good for consumers.

Avalos also said, “I kept hearing healthy options, however none of those options were any different compared to what we have already.

At the end of the day, our students want something different. If you can just go to Taco Bell down the street, why do you want it on campus as well.”

Avalos said in hope for future vendors, “I’m okay with having a green shake once in a while. Let’s hope we have one person doing frutas and bionicos.”