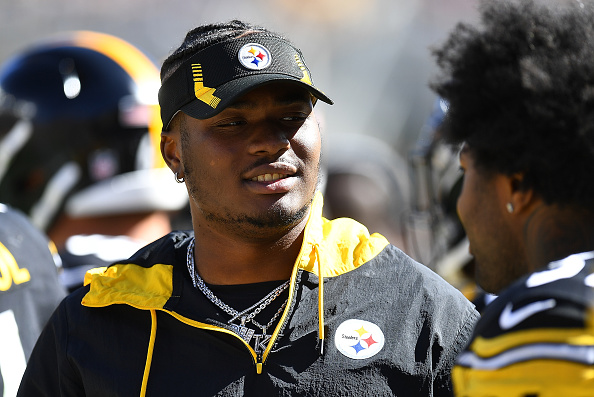 PITTSBURGH, PA – SEPTEMBER 26: Dwayne Haskins #3 of the Pittsburgh Steelers looks on during the game against the Cincinnati Bengals at Heinz Field on September 26, 2021 in Pittsburgh, Pennsylvania. (Photo by Joe Sargent/Getty Images) (Getty Images)

PITTSBURGH, PA – SEPTEMBER 26: Dwayne Haskins #3 of the Pittsburgh Steelers looks on during the game against the Cincinnati Bengals at Heinz Field on September 26, 2021 in Pittsburgh, Pennsylvania. (Photo by Joe Sargent/Getty Images)

Ohio State football legend and pro football quarterback Dwayne Haskins unfortunately passed away at the young age of only 24.

The details of Haskins’ death are still unclear but what has been confirmed is that the gifted athlete was struck by a car in south Florida.

Haskins was at the prime of his young career, only two years removed from his historical sophomore season at Ohio St.

Haskins was a standout his entire football career. He threw for over five thousand yards while in high school and was Maryland Gatorade player of the year. Haskins was also a four star recruit.

While playing quarterback at Ohio State Haskins threw for over 4,800 yards while completing over 70% of passes.

He also threw for 50 touchdowns in his final year with only eight interceptions. He ended his career with a 174 quarterback rating.

Haskins was one of the most electric players in college football in 2018. He finished the year with many accolades.

Haskins earned the Chicago Tribune Silver Football award as the best player in the Big Ten, Big Ten’s Graham-George Offensive Player of the year and was a Heisman finalist.

He led Ohio St. to a 13-1 record and a Rose Bowl win against Washington. They finished third in the AP Poll.

Haskins was drafted in the first round at pick number 15 by the Washington Commanders. He struggled a bit to find his groove behind a poor team and only started six games.

Haskins was consistently in a quarterback battle throughout his first two years in Washington before being cut after poor play and concerns about his character.

Haskins was signed by the Pittsburgh Steelers this past season in hopes of a fresh start. Before his recent death Pittsburgh has stated that Haskins had a real shot to compete for a starting job this upcoming season.

Although starting for the Steelers might have been a long shot, Haskins earned the trust of the organization and was a favorite amongst his peers.

Most of his current and former teammates as well as other players around the league showed nothing but love and positivity for the young athlete following his death.

Lots of players spoke of his genuine personality on and off the field. He was always smiling and connected with so many people around him.

A tweet from Steelers outside linebacker TJ Watt says it all:

“The world lost a great person today. When Dwayne first walked into the locker room I could tell he was an upbeat guy. He was always making people smile, never taking life for granted. His impact on me will last forever.”

Regardless how good of play came from Dwayne Haskins the football and sports world is in mourning of the loss of the 24 year old.

Haskins left an impact on those he touched and his legacy will be remembered forever at his alma mater. Number seven at Ohio St. should never be worn on the field again.