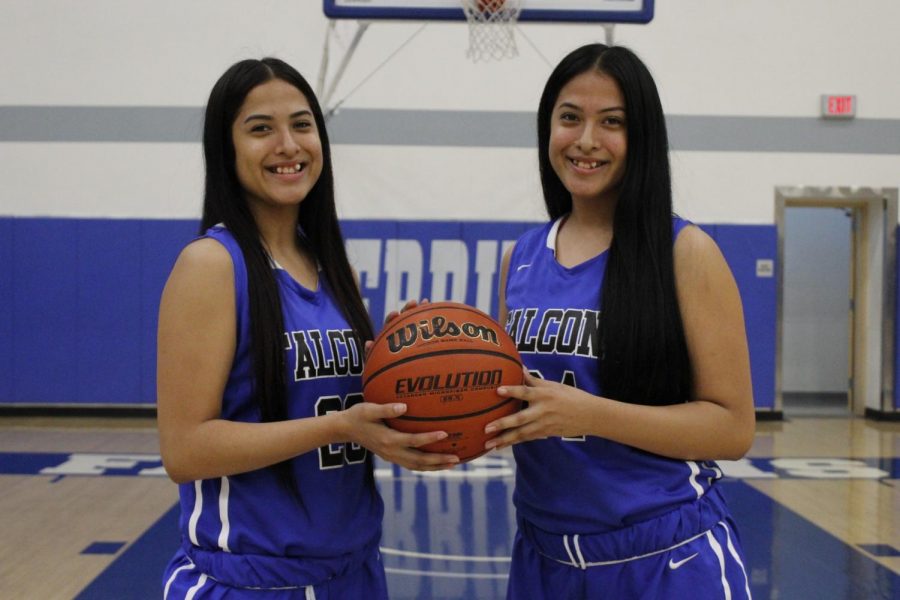 Point guard No. 20 Jesenia and shooting guard No. 24 Serena Rendon, are basketball playing twin sister who are leading the back court.

Twinning in the back court: The superstar twins of Falcons women’s basketball

For some it would be a phenomenal feat in itself playing college basketball, but there’s not one, but two Rendon’s on the court. They are one-of-a-kind teammates, twin sisters.

The 19-year-old sisters have been performing well throughout the season so far. Jesenia is averaging 12 points, four rebounds and three assists per game. While Serena is averaging 18 points and five rebounds per game.

Although, the two are identical in looks, Serena describes herself as the nice one of the two. She said, “I’m really nice and respectful, she’s like foolish and always mad. We’re very opposite, she’s more on the goofy side than I am.–Y’know goofy people they be mean.”

Although, Serena describes herself as the kind one Jesenia says otherwise, she said Serena is the fiesty one, “She looks mean, some people say I look mean, but they always say something about her.

“[they tell me] you look like the nicer twin or why is she [Serena] so mean—like why she got an attitude, I’m like I don’t know, but I’m more nice, I say I’m more nice,” she added.

“She always has an attitude and she’s very stubborn and bratty—our tempers are different, I’m more of the one to pop off before her, every time she do [sic] something, I’m always yelling at her,” Serena said.

Jesenia also said, “I’m more shy—I’m very quiet, when she’s [Serena] there I talk a lot more because I’m comfortable—like every time I meet someone new I’m like ‘well I’m quiet, I’m probably gonna [sic] be boring, but in reality I’m really funny, so you know, just wait,” Jesenia said with a laugh.

“She’s definitely my biggest motivator for sure, we’re each other’s hype man. If she’s doing bad I’m gonna motivate her no matter what, I’m gonna tell her to keep going. She does the same for me, if I’m having a bad game she’s gonna lift me up,” says Serena.

Jesenia talked about playing with her twin sister, she said, “I like it—at first she’s wasn’t going to play because she didn’t like how it took up time and she wants to work, she always wants money.

Jesenia added how she got her sister to play, “I was telling her just play c’mon don’t leave me hanging. It’s just always fun to have someone there with you that you know, because it makes you more comfortable.

“Coming to a whole new school and it’s college, I was scared, I’m like oh my gosh it’s college,” Jesenia said as to why she wanted Serena to come play with her.

When the twins are struggling and are having a tough time on the court during games, Serena explains that head coach Trisha Kozlowski is one of her big inspirations.

“She’s really big on the way we respond to things. If we’re having a bad game or if I’m not having a good game, she’s always saying ‘how are we going to respond to this?’

“‘How are we gonna get through this, who’s gonna be the leader on the team today to encourage everyone and push through and be positive?’”

Kozlowski commented on the Rendon twins, saying it’s awesome having twins on the team.

She said based on personalities, “they’re very different.” However, based on looks she “had to tell them apart for a little bit.”

“I think it’s been very rewarding, I know their family, I’ve coached as an assistant their oldest sister Andrina and their second oldest sister Marissa, so it’s funny for me to see some of the personality traits of those older sisters in them,” Kozlowski said with a chuckle.

You would assume that there would be some sort of rivalry between sisters when it comes to competing, but in reality, no.

Serena said, “When people ask me who’s the better basketball player, I just tell them we play different positions because we do. I don’t like being a point guard, I would never wanna play that position.

Jesenia talks about playing with her sister, “playing with her is pretty fun, you just have a friend on and off the court, someone to talk to all the time and just on the court I’m always looking for her to score because I know she’s going to make a three-point shot.”

The sisters don’t solely focus on the sport of basketball, they have hobbies on the side and taking time out of their day to do other things.

Jesenia talked about some of her hobbies, saying, “I’m very family oriented, I like to be with my family all the time. She mostly does her activities with her sister Serena and her older sisters, “We do a lot together because we’re all close and not that far in age.

“They always come to my games,” Jesenia said referring to her older sisters.

She also elaborated on what they like to do for fun, saying, “we go to kickbacks—go out to eat, get our nails done, or go shopping—the normal girl stuff,” Jesenia said with an outburst of laughter.

Jesenia also loves to listen to music, she said, “Oh I like [SZA] a lot, we always listen to her, I love Taylor Swift—I love all her music, it just gets me into a good mood, I like Drake, Chris Brown and Jhene Aiko.

Serena said, “I like to sleep, I sleep a lot. I like to watch scary movies and go out with my sisters. I have two other sisters, so I just like to hang out with them.”

Jesenia and Serena have two older sisters Marissa and Andrina Rendon who previously played for Cerritos College together in 2012.

“My sister Marissa, she wore No. 24 and that’s the reason why I wear No. 24. People probably think ‘oh, she likes Kobe.’ I mean yeah I like Kobe, but I wear it for my sister.

“She was a role model to me on the court. She’s a point guard, so she’s like Jesenia, but I still look up to the way she plays, her mentality, and she’s just very composed I just loved watching her play,” said Serena.

Jesenia said, her sister Andrina helps them a lot “because she comes to the practices.

“I always look to her to get better and to know what to do on a play or what I’m doing wrong.”

When it comes to playing together on the basketball court the sisters share certain chemistry.

“I love it, I’m super happy to play with my twin on the court just because the chemistry is there, she just always knows where I am and I always know where she’s at. We argue a lot on the court, but I love playing with her. It’s fun,” said Serena.

Off the court the chemistry is filled with a bunch of arguments and funny moments between them.

Serena said, “We’re like best friends, but we also hate each other. We’ll be arguing one second and two seconds later we’re talking about something else. We’re really close, but we just don’t get along.

“We argue over the most dumbest things, We’ll hang out with a couple of our teammates outside of basketball and they always try to stop us from arguing,” said Serena

The Rendon sisters were both brought up playing basketball at a young age. As kids they always had their dad encouraging them to push through and keep striving.

Serena described it as, “Growing up my dad was my coach all the time. When I started basketball my dad was my first coach, he always pushed me to play. I actually wasn’t gonna play college basketball until I talked to him, he talked to me and he just motivated me to continue playing basketball.”

Jesenia talked about her parents influence on basketball, she said, “My Dad is the one who taught me basketball, he did play sports in high school—he played like all the sports…he taught me everything I knew. My Mom she wasn’t a sports person, she’s very uncoordinated.”

Serena described the love she found for basketball and how it didn’t start when she was a kid, but rather when she was towards the end of high school.

“My junior and senior year I was just really over it, but I’ll say I’m over it and when I got on the court I wanted to win. I guess I do love the sport — it just became serious when I got to high school,” said Serena.

Now in college, Serena says when she started playing college ball she fell in love with the sport immediately.

Serena said, “I’ll be over it sometimes, but I think that’s normal because I’ll feel drained some days.”

Serena is hoping that her and her sister go overseas together, “Most likely we will, but if we don’t then we don’t. I’m just used to her always being by my side and just playing with her.”

Jesenia on the other hand said, “I don’t wanna go far—I can’t be away from home.”

However, she also said, “I would like to go overseas though, just to go to new places.” She said her sister Andrina went to Morocco, “she was riding camels on the beach, it was cool.”

Although, Jesenia said that it would be sad to leave home.

Serena now realizes that she wants to further her career with basketball, but is not worried about transferring yet.

Serena said, “I’m not worried about it just because I’m a freshman and I’m the type where if I get a scholarship from anywhere that’s where I’m gonna go. I’m not really picky as long as it’s a good school and the team is solid.”

In 10 years the twins hope to see themselves in a certain position.

Jesenia hopes to have a good job, she also said she see’s herself “moved out for sure, hopefully have a man by then, so I can start my family, I want a big family.

Having five siblings of her own, Jesenia said she wants “at least like five” kids, “I just like a big family, you know the whole tribe, I think it’s cool and just to have a fun household.”

Serena said, “I’ve started my career, or either still hooping. I don’t know about kids, maybe one… I gotta be married though for sure. I actually want twins, two boys [and] that’s a big chance obviously.”