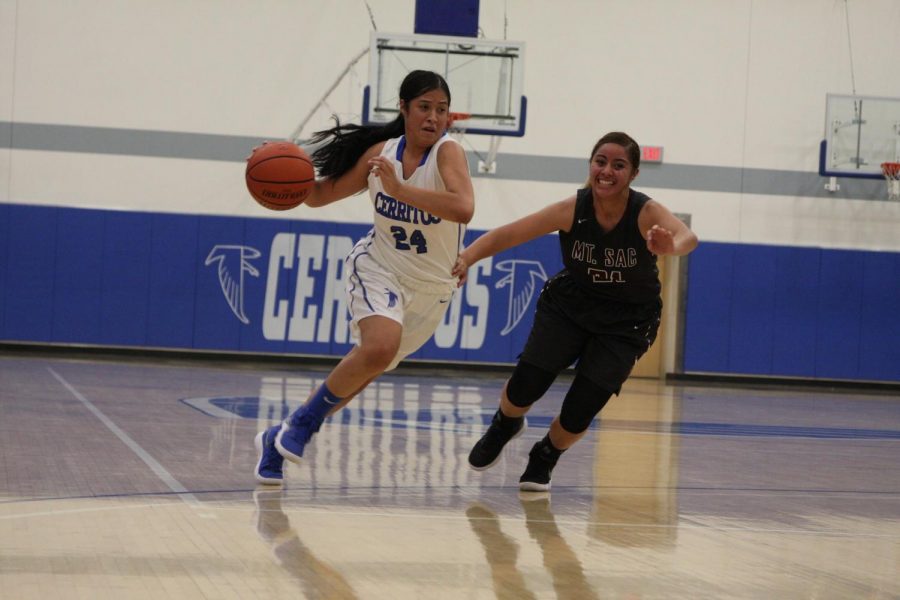 No. 24 Serena Rendon drives the ball past a Mt. SAC defender. Rendon had a team high 23 points.

The Falcons’ leading scorer at 18 ppg — Freshman No. 24 Serena Rendon, had this to say after the game, “I need to fix my attitude though, definitely. I’m kind of negative sometimes, like if something’s not going my way—I’m going to get frustrated.”

She added, “I’m sure if I have a better, positive attitude I could do better within myself.”

Rendon finished the game with 23 points, a team high eight rebounds and four made 3-pointers.

The Falcons bench was out scored 29-4 in the game.

Most of the bench points from Mt. SAC can be attributed to one player, No. 21 Deja Siaki, who scored a game-high 24 points.

Head Coach Trisha Kozlowski said, “We got nine games left, shot at playoffs—let’s go after it”

Rendon said, “I think next game will be a win for sure.”

The team was down nine points with two minutes remaining in the game.

Rendon was clutch in the fourth quarter, hitting two 3’s with under a minute to go, bringing the game as close as four points.

No. 10 Gillian Yamasaki had a strong outing, but was on the bench for the majority of the last five minutes when the game was reachable.

Yamasaki spoke about being primarily on the bench to end the fourth quarter, she said, “I don’t mind it because everyone else is working hard too and we’re all working towards the same goal.”

Cerritos was beat handily on the offensive rebounds, with Mt. SAC grabbing 15 to the Falcons’ eight.

No. 2 Angie Ferreira, sophomore—guard said, “on the defensive end we have to tighten it up; box out, we got killed on the O-boards [offensive rebounds], it needs to be one shot and done.”

Cerritos would end up maintaining a lead throughout the first quarter, finishing the quarter up six.

Later, Mt. SAC took their first lead in the second quarter opening up with a 10-0 run.

Part of that run can be attached to turnovers, as several players had at least three.

Ferreira, who had 7 turnovers in the game said, “My individual performance was alright, I could have done better on the defense end and limiting my turnovers.”

Although, both teams finished with an equal amount of turnovers at 20 a piece.

Kozlowski shared, “I thought we battled for 40 minutes, I think if a couple plays go our way, then we’re right there.”

The Falcons trailed at halftime by a single point, after giving up 20 points in the second quarter.

Yamasaki said, “…we really worked hard to try and win the game—that’s all you can really ask.”

The Falcons play their next game against East Los Angeles College at 5 pm, the game will be played at El Camino College.