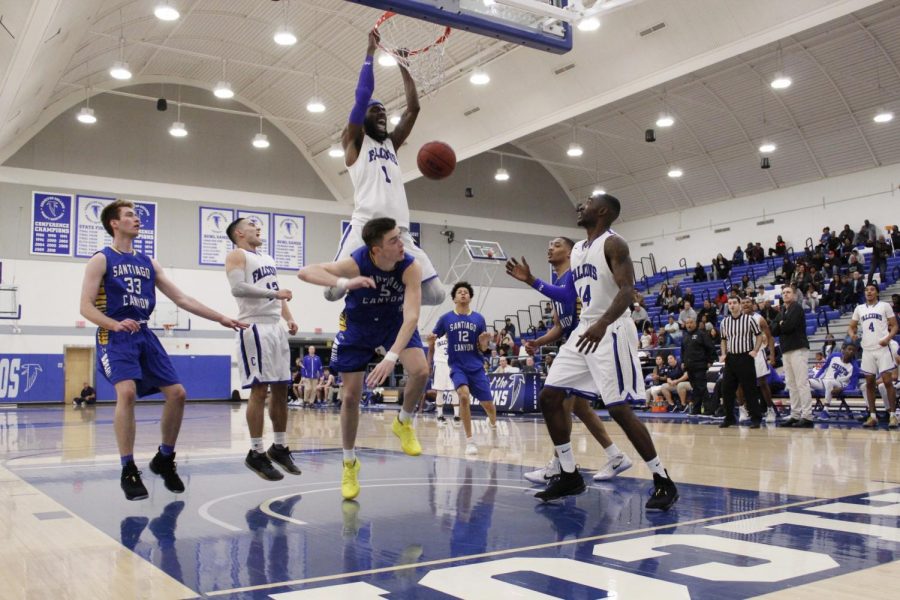 No. 1 Demetrius Thomas puts his opponent No. 5 A.J. Garrity on a poster with a putback throw down. Thomas had 19 points in only 22 minutes.

The men’s basketball team has not been to the CCCAA State Tournament in 16 years, since the 2001-02 season.

The Falcons went into halftime with only a one point lead, however, thanks to a 56 point second half, the team was able to make a commanding statement in the last home game of the season.

The team also limited Santiago Canyon to 37 points in that second half.

Guard Keshaun Mack (No. 14) explained what turned a one point halftime lead to a 20 point second half blowout, he said, “We were just hungry, we really wanted to head to Ventura and try to win it all, we got enough talent to win it, so that’s our focus.”

Mack had a near triple-double stat line that consisted of leading his team with 22 points–while adding seven rebounds, to go along with six assists.

Our team played “outstanding,” head coach Russ May said of the team’s performance, “Our guys really came to compete and our rule was let’s make everything tough for them–they’re a very good team with two high level players and we were able to do a really good job on them.”

He said “rebounding, intensity and attention to detail” were the elements that contributed to the win.

Demetrius Thomas (No. 1) a regular starter, MVP of the South Coast Conference, and leading scorer of the team–did not start in this game for showing up late to practice, according to Thomas.

Even though he did not start, Thomas still went on to score 19 points and grab seven boards in only 22 minutes of action.

“That’s my punishment…I’m alright with it, 22 minutes–I deserved to come off the bench because of what happened,” Thomas said, “as long as we got that win, that’s the only thing I really care about.”

Forward Jason Carter received the start in place of Thomas.

It definitely fared well for Carter, as he ended the game with a double-double of 20 points and 10 rebounds.

Carter said, “I think i did good, I just did what the coach told me to do, I knew they (Santiago Canyon) were going to be small, so I had to dominate in the paint–I believe I did a good job today (of dominating the paint).

Carter also spoke about his mentality during the game to ask for the ball and make a play, he said, “I had a talk with coach [May] and I just got to be more aggressive, because I am a leader on this team and sometimes I am more passive than I should be, so I took it upon myself.

“I just took it to the basket and if I didn’t shoot it, I made a good pass and got something for my team,” he added.

Free throw shooting—which was a detriment to the team in its triple overtime win in the first game of the playoffs, was a positive for Cerritos in this game, as the team shot 80 percent at the charity stripe.

Thomas said, “We’re going to need that to move on in the playoffs, [that’s a] big key.”

Although the team shot well from the line, No. 21 Jonathan Guzman did not have any free throw attempts, he said, “I need to get to the free throw line, I need to be more aggressive, but it wasn’t my time to be on the charity stripe, unfortunately.”

He continued, “I’m pretty sure the next few games that we play I should be at the line, because I’m a pretty good free throw shooter.”

The Falcons men’s basketball squad will take on Yuba College on March 9 at 3 p.m. in the CCCAA State Tournament – Quarterfinals, the game will take place in Ventura, CA.

The team’s next opponent Yuba College have a 16 game winning streak coming into this game.

However, the Falcons are no strangers to double digit win streaks, as they had one as well–with 10 straight victory’s towards the end of the regular season.

Click this link for live tweets and exclusive videos from the game: https://twitter.com/talonmarksports/status/970136268494454784